Hanging out with Darwin
cause mischief (sometimes)

To get Penny to fall in love with him (Succeeded)
Keep Elmore safe from Dr. Wrecker (Rob, ongoing)
goals depend on episode

Zach "Gumball" Tristopher Watterson is the main protagonist of the television series, The Amazing World of Gumball.

He is a student that attends Elmore High School along with his brother, Darwin, and his sister, Anais. He has a major crush on Penny. She has a crush on him too, but both have trouble expressing their feelings to each other. In "The Shell" they finally express their feelings for each other. At times, he causes trouble, but then later learns from his mistakes. His mortal enemy is Rob.

Gumball is a light blue cat. On his over sized head, he has 6 whiskers, but 5 are shown because he is 2-D. He wears a tan sweater with brown cuffs and a brown collar and rolled-up grey trousers. The inside of his mouth is pink, his tongue is light pink and his nose is orange.

Gumball is portrayed as a fun-loving, imaginative, rather optimistic, and a very mischievous cat. When his mishaps get himself into a mess, he usually attempts to fix things with somewhat dimwitted ideas, which usually get him into even more trouble than before. No matter how his schemes resolve themselves, Gumball's naïveté stops him from learning his lesson. He usually plans his mishaps with Darwin. Like Darwin, Gumball does not appear to notice deception, which may mean that he is too optimistic to notice most negative things around him.

Gumball has a big ego, and it is where he is most sensitive. Otherwise, he is usually positive on all matters concerning him. Gumball is smart, but that doesn't mean he's wise. At times, he acts really stupid, and goes to great illogical lengths to find something, but he has shown some degree of cleverness in other circumstances. He happens to have a superior vocabulary than that of most of his classmates, using more mature words. Gumball has also displayed extents of observance and operational ingenuity, such as being able to identify small things like the burn markings on Rocky's palms, intellectually arrange escape routes based on his surroundings, and even counter his own mother Nicole's hand-based offenses for a great deal of time, shown in both episodes "The Date" and "The Remote"; in which case, even secretly confiscating her car keys from her pocket in the process. His antics have gotten him in dangerous and often life-threatening situations, usually saved by luck or by someone more sensible at the time. He has shown skill in building, when he made a system of chain reactions to launch a bowling ball onto the moon, as seen in "The Car," though he failed miserably in the last element that held the launching spring up.

He is a decent cook, making a very good sandwich for Darwin as mentioned in "The Secret," and is shown making a good (extremely spicy) meal for him in the same episode. He also got a B in home eds for his cooking, and Miss Simian called his cooking divine. However, in "The Responsible," Gumball makes disgusting food for Anais, consisting of a rotten fish between bread slices, and an old shoe. In "The Knights," Gumball made a cake for Mr. Fitzgerald. Gumball is also shown to keep on forgetting his Archenemy's,Rob's,name,which is a running gag in the show.

Gumball, as a cartoon character, can do all kinds of cartoonish things like growing another head, run very fast, etc. 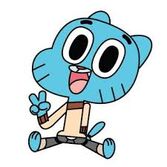 Gumball in his promotional picture.

Retrieved from "https://hero.fandom.com/wiki/Gumball_Watterson?oldid=831981"
Community content is available under CC-BY-SA unless otherwise noted.