Ultimate Breeder
Tanaka the Forbidden One

Caring for his pets.

Studying the dark arts.
Battling for survival (during the killing game).

To get out from Killing School Trip (failed, DR2).

To stop Ryota Mitarai from brainwashing the world with hope (succeeded).
To atone for his actions as Ultimate Despair (ongoing).

Gundham Tanaka is one of the characters featured in Danganronpa 2: Goodbye Despair as well as a supporting protagonist. He has the title Ultimate Breeder. (Super High School Level Breeding Club Member). He also owns four hamsters, referring to them as the “Four Dark Devas of Destruction”. (Four Heavenly Kings of Darkness and Gods of Destruction).

In Chapter 4, he and Nekomaru Nidai dueled to the death to save the others from starvation. Gundham came out as the winner, which also made him the culprit of the fourth murder case. But in reality, both Gundham and Nekomaru are still alive.

Gundham appeared in Danganronpa 3: The End of Hope's Peak Academy - Side: Despair with the other Remnants of Despair. He is known as Tanaka the Forbidden One in this installment (even in the credits), apparently refusing to let people speak out his given name. Gundham succumbed to despair along with his classmates after being brainwashed by Junko Enoshima and became a part of Ultimate Despair.

Gundham wears a long, black jacket that is always left open and, according to his reference sheet, is his school uniform. The left sleeve is pulled up to the elbow and held by silver pins and he wears a long purple scarf that often covers his mouth. The back of his jacket, as well as both ends of his scarf have a strange, vertical symbol printed on them. Under his jacket, he wears a white button-up shirt that is also left open, and another shirt under it which is slightly darker and has a greyish-purple cross design across its front. He seems to be wearing normal black pants held up with a black belt and silver buckle, and black boots with numerous straps across them.

Gundham's skin tone is noticeably pale and greyish compared to the other characters, which could suggest that he doesn't get out much. His head appears to be shaved from the neck up to his temple, where the rest of his hair seems to be slicked back with the exception of a poof of hair in the middle that sticks up and is fairly curly. His hair color is black with pale grey streaks through it. This may either be due to bleaching his hair or a melanin deficiency known as poliosis, giving him several 'Mallen streaks'. Gundham's hair also seems to defy the laws of gravity at times. It is speculated that he does so by using 5 pounds of L'oreal and Hair Gel.

Interestingly, Gundham has no eyebrows, which is confirmed in the limited edition's artbook. He has grey eyes, but his right eye has a red contact lens. He also has a greyish scar tattoo that runs down the left side of his face and through his left eye. His entire left arm, at least up to the elbow, is completely covered in bandages, presumably due to injuries that he received while taking care of or calming down his hamsters. His 'Hell Hound Earring' (Devil Dog Earring in the Japanese release) hangs from his right ear, and he wears two silver rings on his right hand (pointer and middle).

During his high school years at Hope's Peak Academy, he wore Hope's Peak Academy's uniform, but still had the same scarf, shirt, belt and boots. Instead of one Hell Hound Earring, he had one on each ear. His hair style is different.

Gundham is also constantly next to or surrounded by his four hamsters, the Four Dark Devas of Destruction, San-D (orange and white), Jum-P (grey and white), Maga-Z (chipped ear), and Cham-P (big and orange). They apparently often camp out inside the scarf that Gundham always keeps wrapped around his neck, occasionally coming out every now and then.

As a member of Ultimate Despair, he seems to be wearing some sort of straitjacket along with an ordinary jacket with a very fluffy collar. His face has more tattoos.

Gundham has an eccentric and somewhat dark personality. He often claims that he has been blessed with the evil powers of the underworld, and refers to everyone else as 'pathetic human beings'. Gundham is often lost in his own little world, usually paying more attention to himself or his hamsters than the things that are going on around him, such as in Chapter 1 when he failed to investigate after the murder and putting his lost Hell Hound Earring at a higher priority. He may also have an interest or knowledge of alchemy.

Despite first impressions, Gundham is generally rather comical in what he says to Danganronpa spectators (not so much for characters actually talking to him), and somewhat contradicting or counterproductive: such as in his introduction, when he tells Hajime Hinata to step forward and introduce himself, for Gundham will destroy him once he does. He also constantly tells others not to come near him or to touch him, claiming that poison runs in his veins.

However, despite his 'I am the Dark Lord' ramblings, Gundham is shown that he seriously cares about animals, and understands them much better than he understands people. In one of his Free-Time Events, he tells Hajime that he runs an informational website about breeding which he maintains carefully. It is also implied that though he puts on the face of a loner who wouldn't dream of hanging out with pathetic mortals, Gundham actually may be very lonely as he once boasted that he was searching for solitude before wandering away slowly and silently. 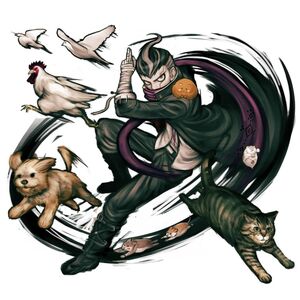 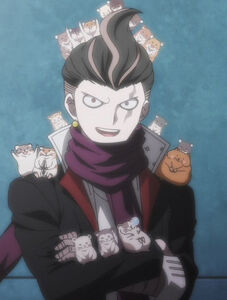