Prince of the Drenchen Clan

End the Skeksis' reign of Thra.

Gurjin is one of the tritagonists of The Dark Crystal: Age of Resistance. He is best friend of Rian and the brother of Naia and son of Maudra Laesid.

He is performed by Dave Chapman with Harris Dickinson providing his voice who also played Prince Phillip in Maleficent: Mistress of Evil.

Gurjin is the brother of Naia and son of Maudra Laesid of the Drenchen Clan. At some point, Gurjin joined the Gelfling Guard at the Crystal Castle where he became friends with Stonewood Warrior, Rian and the Vapran guard, Mira.

While doing his usual patrol, Gurjin was dragged along on an unwanted adventure for hunting an Arathim soldier with his best friends Rian and Mira while wanting to be at his post. Gurjin gets annoyed by the couple and begrudgingly follows them as their third party while also complaining. He stopped, wanting Rian and Mira to continue on by themselves. However, Gurjin was suddenly confronted by the Arathim spitter and yelled for Mira and Rian. The two came back and the three friends pursued the spitter but it escaped down the catacombs. Mira was more determined than Gurjin and Rian and flew down herself. When they did not hear from her, Rian went down to search for her, ignoring Gurjin's calls. After waiting for his friends, Gurjin went back to his post, remaining oblivious to what really happened to Mira. (End. Begin. All the Same)

Later, while at his post, Gurjin is suddenly interrogated by Rian's rival, Tolyn, who shares SkekSil's lies that Rian murdered Mira and that they accused him because he was Rian's best friend. Gurjin actually is oblivious to his best friend's whereabouts. The two guards left him, but both suspected him of being a traitor as well. Gurjin went back to his post when Rian pulled him into a conversation. Gurjin demanded to know what happened to Mira and revealed the accusations the Skeksis made to Rian that he killed his girlfriend. However, Rian told his best friend's to dreamfast with him to know the truth. Gurjin did and lived Rian's memory of Mira's essence being drained. Gurjin refused to see any more but was now aware of the crimes the Skeksis had and that they were responsible for Mira's death. Gurjin comforted Rian and choose to stand by Rian, deciding to go with him. However, his best friend needed more than just his words.

Rian revealed that he needs evidence to prove that Rian admitted the truth or in case something bad happens to him. Gurjin realizes that they need it also because of something happened to Rian, Gurjin wouldn't be able to share his memories with other Gelflings. After evading skekZok and skekAyuk, they came across the Crystal of Truth, with Gurjin wondering if it was supposed to be that color but Rian revealed it has been corrupted. The duo climb down the shaft of air that the Crystal hands over and into SkekTek's lab. However, they are unable to get Mira's essence due to a locksnake and the Chamberlain approaching. While SkekSil and SkekTek squabble, Rian grabbed Mira's vial and he and Gurjin ran for it. However, SkekSil took Gurjin hostage and attempted to get Rian to have him Mira's vial. Gurjin told Rian not to listen to the Skeksis. When one of the three Suns peaked over the nearby window, Gurjin stabbed the Chamberlain and yelled to Rian to run. Gurjin was able to ensure his best friend's escaped and gloated to the scientist and the Chamberlain that they would never Rian now.

Later, Gurjin was imprisoned in the Skeksis' dungeons, where he was confronted by SkekSil, who showed him the peeper beetle. The Gelfling thought that the Chamberlain was going to torture him with it. However SkekSil was only threatening Gurjin with it and said that torture for Gelflings would be even worse. He pressures Gurjin to tell him where Rian went but Gurjin remained defiant and refused to betray his best friend. SkekSil left in anger and stormed out of the dungeon, leading Gurjin to remain with his thoughts.

SkekSo ordered Gurjin be left alive in case he proved to give more information.

Later, Gurjin suffered torture from SkekVar. He attempted to break Gurjin while using the Dark Crystal into revealing where Rian was. However, Gurjin still refused to give up his best friend.

Gurjin would not suffer long, for his sister, Naia and her best friend Kylan rescued him. Later, Gurjin, Naia and Kylan learned that SkekMal had kidnapped Rian and gave him to SkekSil. Gurjin and Naia went to rescue him while Kylan stayed behind to make broth for them when they returned. Gurjin and Naia boarded the Chamberlain's carriage. Rescuing his best friend, Gurjin, Naia and Rian escaped on SkekSil's Armaligs. Rian informed his friends of his father's death, and Gurjin comments that Ordon was a good captain. He joins Rian, Kylan and Naia in dreamfasting to learn more of the Skeksis that Rian had encountered but isntead of regular dreamfasting, Gurjin's spirit is sent to the Dreamspace, where Aughra reveals that she brought them all together and that Thra calls out to them all. However, Seladon refuses to submit, causing Aughra to return her to her body. Gurjin learns of Brea and Deet's part in the tale and that they all must save Thra. Aughra tells Gurjin, Naia and Kylan to go to all seven corners of Thra and unite the seven Gelfling clans. Afterwards, Aughra sends Gurjin back to his body.

Arriving in Ha'rar, Gurjin and the others noticed Brea and Deet locked in the Skeksis' carriage as he reminded of his torture in the hands of the Skeksis potentially done to them; the band pursued the carriage with the Armaligs. While Rian stopped the carriage, Gurjin, Naia, and Kylan tried to open the cage but could not do so until Lore (the guardian of Brea) arrived and ripped it open, frightening the Skeksis away. After sending the freed paladins to send word, Gurjin accompanied the others into the Crystal Desert, following Lore to the Circle of the Suns and participating in singing a dirge for the All-Maudra Mayrin, who was killed by SkekVar for her supposed betrayal. Rek'yr then arrived to take Rian, Deet, and Brea to the Circle of the Suns; Gurjin says his farewell to Rian, hugging him before he and his sister depart to spread the word and build the rebellion along with Kylan.

As Rian managed to reunite the Dual Glaive and ignited the blue flames across Thra, Gurjin responded to his message from the Great Smerth. He would later arrive at the Second Battle of Stone-in-the-Wood with Naia, his mother Laesid, and the rest of the Drenchen Clan, eventually celebrating their victory with Rian by giving hugs to every Gelfling including an Arathim Silk Spitter. 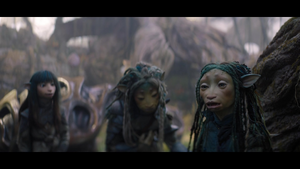 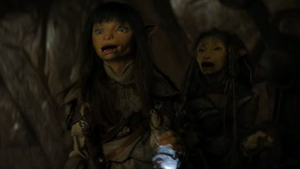 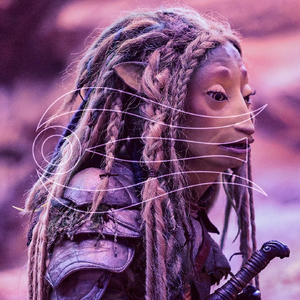 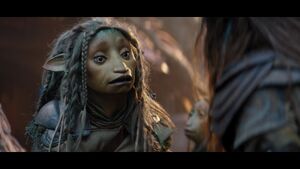 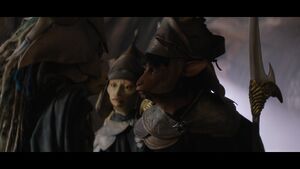 Retrieved from "https://hero.fandom.com/wiki/Gurjin?oldid=2157329"
Community content is available under CC-BY-SA unless otherwise noted.