Jumping from the walls
Sprinting

Get rid of M. Bison and Shadaloo.
Save Rose (succeeded).

After Mike Haggar was elected Mayor of Metro City and vowed to clean up the streets, Guy and his training partner, Cody, set out to fight Mad Gear and rescue Cody's girlfriend, Jessica. After the events of Final Fight, Guy continues his training which is now nearing completion, and eventually the grandmaster of the Bushinryu style, Zeku, acknowledges him as a worthy potential successor to the art. However, there can only be one grandmaster at a time, and Zeku reveals that they must now fight to determine who shall lead. Guy ended up winning the battle and became the 39th heir to the Bushinryu art. After the battle, Zeku warns him of an evil force which threatens to corrupt the world, before disappearing. Guy resolves to defeat the evil that his predecessor warned him of.

It is soon evident that the evil that Zeku spoke of is Shadaloo, and Guy sets out to destroy it. In his investigations he encounters a mysterious woman named Rose, who is determined to destroy Shadaloo's leader, M. Bison. Guy attempts to dissuade her from her quest in an attempt to protect her, but she continues on regardless. As Guy continues in his search for Shadaloo, he encounters his old friend Cody. However, the reunion is not a happy one... Cody, restless for streetfighting, has been unable to adjust to a life of peace. He has become a merciless vigilante, has been locked up for his violent rampages, and is now an escaped convict.

Guy realizes that Cody's fight against crime was never motivated by justice but by a love of fighting; the two then have their own battle but after they both calmed down, Guy accepted that his friend had to live his own life. When Guy asked if Cody would stay in Metro City, he replied that he still had traveling to do and the pair continues their journeys. Guy bids him farewell, realizing that deep down inside, Cody is still a good person. Guy is later confronted by Maki, who challenges him for his title. Guy does not acknowledge her as worthy, however, and the fight is not a death match. Soon Maki is forced to concede defeat, but asserts that she is not about to give up.

During the events of SSF4, Guy decides to target S.I.N. and eventually runs into Cody, who once again escaped from prison. The two face off in a duel and although the result is unknown, Cody continues on his way, leaving Guy with the words "people change - I've changed, you've changed".

Guy is usually portrayed with prominent bangs that are long enough to cover his eyes, but their length seems to vary based on the artist. A frown is constantly seen on his face; he very rarely laughs or smiles. His build is rather top-heavy, with slim, muscular legs and predominant bulkiness of his chest, shoulders and arms.

Guy wears a red or orange sleeveless ninja gi with a white outline and a wire mesh shirt underneath for defense. The kanji (武神, Bushin) written on Guy's gi literally translates to "god of military arts." His footwear was originally a set of ninja boots in the first Final Fight game. In the Alpha series, Guy's footwear is changed to are a pair of High-Top Nike Dunks, an intentional contrast to the rest of his traditional outfit and a trademark of his often referenced by other characters and Guy himself in win quotes.

Guy is calm and reserved, with a sharp mind, a noble spirit, and a strong sense of justice. He is a stoic warrior who carries out his duty as a ninja with an almost professional air of detachment; his demeanor in his initial Street Fighter appearances was unusually standoffish, though his aloofness has given way to politeness in more recent portrayals. His grim face rarely shows any emotion, with the most noticeable one being occasional shock, such as when he saw the fate that befell Cody.

Guy dislikes interfering in the lives of others, and believes everything should be left as is, only fighting when he deems it necessary. He is fiercely protective of his allies, as shown by his interactions with Rose, urging her not to sacrifice herself to defeat M. Bison, and rescuing Maki from Bison in her ending. 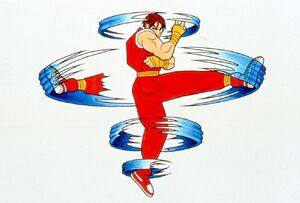 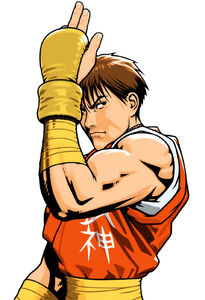 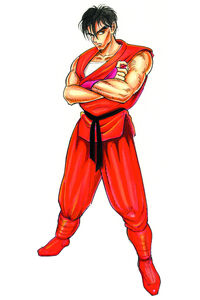 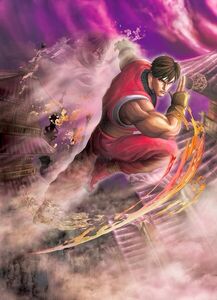 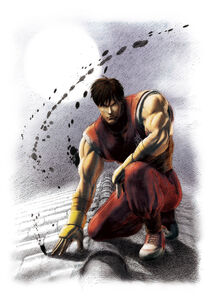 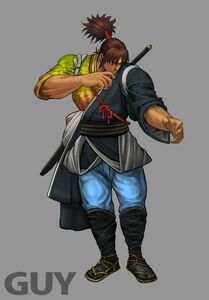