Gwen Stacy (Spider-Man: Into the Spider-Verse)

To return to her universe (succeeded).

Gwendolyne Maxine "Gwen" Stacy is the tritagonist of Spider-Man: Into the Spider-Verse. She is one of the Spider-People pulled out of her dimension by the Kingpin, using his super collider.

Gwen is voiced by Hailee Steinfeld, who also portrays Mattie Ross in the 2010 remake of True Grit, Emily Junk in the Pitch Perfect film series, Charlie Watson in Bumblebee and Vi in Arcane.

Gwen Stacy is a calm, composed, and a confident young girl who shows no fear in fighting against super villains like Doc Octavius who is capable of handling at least a couple of the spider gang. Gwen was shown to be matured than most of the spider gang with her being more composed than Peter Parker when he saw MJ on Earth's 1610 which Peter resulting in apologizing to MJ even though Gwen said it's not his MJ. In her universe,Gwen joined a band which was explained in her backstory. She is also a trained dancer as shown in the film which she wore ballet shoes with her fighting style being graceful like a ballet dancer.

She had a best friend named Peter Parker, who tragically died from the stress of both transforming into a giant mutated lizard and fighting with Gwen. Subsequently, she decided to avoid friends and save everyone else. She then enrolls in a private school after being transported to another universe because of the collider incident orchestrated by Kingpin and later encounters Miles Morales where he does the Einstein joke which results to Gwen laughing and liking his lame joke that she thinks it's smart, the two instantly took a liking to each other. After Miles gains spider-powers,he gets his hand stuck to Gwen's hair when he was trying to hit on her,making her have to shave that side off and eventually making it an undercut much to her dismay. Gwen walked out of the school irritated and saw Miles walking sideways at the building which confirmed her suspicions that he is like her.

The two met again on the Alchemax with Gwen rejecting Miles compliment about her hair. The two reconciled in the bus with Miles asking if she is ready to do friends again, his free which she kept in mind. Throughout the film, the two have bonded as friends with Gwen taking a selfie together after the incident at the Alchemax. In the finals parts of the film, Miles asked Gwen if he gets to like the hairdo now which in turn her teasing him by saying that her being 15 months older is significant as a joke for a callback, Miles later callbacks the Einstein joke. They later concur as friends with Miles rubbing Gwen's hand with affection in which Gwen reciprocates. Two days later with Miles Morales being the Spiderman of Earth's 1610 New York Gwen later appears at the portal in front of Miles and asked him if he got a minute. While Gwen seems to have shown throughout the film that she feels the same way as Miles did, her feelings for Miles still remained ambiguous. Nonetheless, she shows care for Miles as she asked the spider gang if anyone heard of him which shows her concern for him that he might be in a really bad spot.

Spider-Man: Into the Spider-Verse

In her universe, she was bitten by a radioactive spider and spent two years operating as Spider-Woman. At some point, she joined a band as a drummer. She then intended to utilize her powers to save her father (who was a police officer), but sadly, she failed to save her best friend, Peter Parker (who transformed into a lizard in her universe). Because of this incident, she then started to distance herself from other people to avoid any distractions, and made it her goal to protect the innocent.

She was sucked into the portal that leads to a different dimension, and somehow traveled back to one week earlier before the super collider exploded. She ended up in New York but it was not the same city she knew. Later on, her spider-sense led her to Brooklyn Visions Academy where she met Miles Morales. In physics class, Miles sits next to Gwen. Later, in the hallway, Miles bumps into Gwen, and when she asks him why he is so sweaty, he awkwardly explains that it was puberty, but doesn't know why he said that. He introduces himself and Gwen tells him her name is “Gwanda”. Miles is confused because he has never heard of that name before, then does the shoulder touch like his uncle taught him as a way to charm her. After letting go of her shoulder, Miles accidentally gets his hand stuck on the side of Gwen's hair. Later, at the doctor's office, the side of Gwen's hair is shaved off. Outside, she sees Miles walking on a wall, which causes her to become suspicious.

Later at Alchemax, Miles and Peter are stealing information to stop the collider while escaping from Olivia Octavius, who turns out to be Doctor Octopus in Miles' universe. Gwen takes on Doc Ock and steals back the computer's hard drive. When she removes her mask, Miles recognizes her from Brooklyn Visions and Gwen properly introduces herself. The trio escaped from Alchemax's grad students security. They got on a bus and Miles consoles Gwen on the death of her best friend. He offers to be her friend if she is ready to begin making friends again.

In Peter Parker's house in Queens, they meet May Parker, who is astonished to see Peter but knew that he was from a different dimension. Aunt May leads the trio to the Spider-cave where the original Peter had kept all of his Spidey suits as well as the photographs of the criminals that he had been pursuing as Spider-Man. Here they meets the other spider people from respective dimensions; Peni Parker, Spider-Ham and Spider-Man Noir. The group discusses which one of them should stay behind to stop the collider, Miles willingly volunteers when the others start glitching in pain. They test him to see if he had what it took to be a hero, but much to their dismay, Miles was inexperienced. They discuss how they don't think Miles was ready, unaware that Miles, invisible, eavesdropped on the whole conversation and left to stop the collider regardless of what they thought. Gwen sadly watches him leave.

After Peni completed the new override key, Gwen asks the others if they had heard from Miles, and are interrupted when Miles returns to inform them that his uncle, Aaron Davis, was the Prowler and have been working for Wilson Fisk. Gwen asks Miles if he was followed and he claims he didn't think he had been. The heroes' spider-senses activate and they are confronted by the villains, with Gwen fighting against the Scorpion.

Later, the heroes visit an dejected Miles' dorm room at Brooklyn Visions, where he was devastated over the loss of his uncle. The heroes try to comfort him, telling him that they had all lost loved ones, but Miles blames himself for what happened to Aaron.

Later, Miles' roommate, Ganke Lee, enters the dorm and start to read comics, with the heroes all hanging on the ceiling, but he spots them. Ganke passes out when Spider-Ham asked the heroes about animals talking in Miles' dimension. The heroes make the decision to stop the collider without Miles, due to his inexperience with his powers. They arrive at Fisk's mansion, where Fisk claimed that he and the original Spider-Man were 'very close', but Gwen doesn't believe it and called him a pig to which Spider-Ham took offence. Spider-Man Noir points out how the waiters were dressed. They then enter the mansion wearing bow ties and web up two security guards on the way. The heroes enter the collider and Peter volunteers to insert the override key, but they are forced to fight the villains, who anticipated their arrival. Despite being outnumbered and glitching out, Miles, in his new suit, arrives to aid the heroes.

Gwen is nearly bested by Doc Ock and fell into the portal, but is saved by Miles. She compliments him on his new suit. Gwen, Miles and Peter teamed up to fight Doc Ock, but when Doc Ock recovered and advanced on them, she was hit by an interdimensional semi-truck. Miles volunteered to insert the override key, and Gwen and Peter watched him swinging perfectly. Miles opened the portal and the heroes bid farewell before returning to their own universes.

Before leaving, Miles asked Gwen if he got to like her hair-do now, but she teased him by saying that she's fifteen months older than him, like in physics class, Miles quotes what Albert Einstein said about time being relative. He asked her if she wanted to be friends with him and she graciously told him that they are now friends. Gwen said goodbye to Miles and jumped through the portal to return to her universe.

In her own universe, Gwen sat upon a rooftop looking at a picture of herself and Miles on her phone. At the end of the film, Gwen opens a portal to Miles's dimension and asked him if he had a minute to talk. 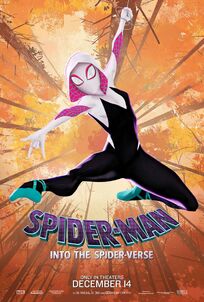