Heroes Wiki
Register
Don't have an account?
Sign In
Advertisement
in: Article stubs, The Legend of Zelda Heroes, Elderly,
and 28 more

The Legend of Zelda: The Faces of Evil

Gwonam is a character from the non-canonical Link: The Faces of Evil. He is a prophet who aids Link during his adventure.

Gwonam is a wizard from the islands of Koridai and he arrives in Hyrule to warn King Harkinian that Ganon is invading Koridai. When the king asks how the kingdom of Hyrule can help, he presents a written prophecy, stating that "Only Link can defeat Ganon", Link eagerly agrees to help, but Gwonam tells them that they have to leave immediately, and that all he can take with him is his trusty sword (although Link asks for a kiss from Zelda before he leaves, which Zelda refuses).

Afterwards, Gwonam and Link depart for Koridai. Upon reaching the island, Gwonam shows Link the Faces of Evil (large sculpture-like formations resembling various villain's heads) and tells him that he must conquer each one. He then gives Link a map, asking him where he wishes to head first.

Throughout the game, Gwonam will reveal what each of the bosses are doing to the helpless citizens of Koridai (in most cases, turning them into their unwilling servants), and warns Link to proceed with caution.

Once Link finally defeats Ganon and rescues Zelda, the two of them are immediately teleported onto Gwonam's magic carpet. Gwonam congratulates Link on successfully defeating Ganon, and tells him that Koridai is returning back to normal, stating that "The birds are singing, isn't it beautiful?" 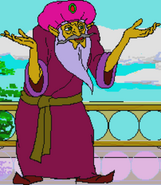