Make an invention that isn't evil.

Gyro Gearloose is one of the characters in the 2017 reboot of DuckTales series. He made his debut in the Season 1 episode "The Great Dime Chase!".

He is an inventor who works for Scrooge McDuck .

Gyro appears in the reboot series as Scrooge's personal mad scientist. In addition to being Scrooge's scientist, he is assisted by Fenton (as an intern) and Little Bulb like the original. In this series, Gyro has white hair and wears a green suit as opposed to his red hair and pink suit in the original series, and appears to be physically younger as well. His lab is now located in a basement beneath The Money Bin. He is also less friendly and more eccentric compared to most portrayals of the character, his personality and inventions both described by the writers as "wildly misunderstood". However, in spite of his arrogance, he still cares about his inventions and won't hesitate to stop them from doing further damage and protecting those he cares about. He also utters out "blatherin' blatherskite", which was originally Fenton's expression, whenever he's frustrated and even named his newest idea, "Project Blatherskite". In the second season episode "What Ever Happened to Della Duck?!, it is revealed that he has worked for Scrooge for at least ten years, since Della Duck used his Oxy-Chew to survive in the moon.

In the episode "Astro B.O.Y.D.!", it's revealed that he used to be like his previous incarnation, even keeping his original design. But after the disaster cause by the supposedly failed "2-BO" (a.k.a. B.O.Y.D.), he became the bitter and cynical scientist he is today.

In the episode "The Last Adventure!", he asks of Lil Bulb to "Look after your brother.", referring to Boyd. As of this episode, he seems to have grown closer to the robot boy, and we see a softer, fatherly, side to him. 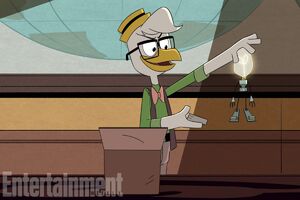