Protecting his Family
Ruling the Underworld

The Titans
The Gigantes
The Olympians (sometimes)
Percy Jackson (formerly)

Hades is a major character and one of the thirteen Olympians from the Percy Jackson and the Olympians series by Rick Riordan, and is one of the Big Three alongside his brothers Zeus and Poseidon.

He is the Greek God and ruler of the Underworld, riches and the dead. At first Hades was thought to be a villain, but then it was revealed he hadn't stolen the Lightning Thief, and wasn't as evil as believed. He also helped the demi-gods in the end, and got his own cabin for his children in Camp Half-Blood. He is also the father of Nico di Angelo, Bianca di Angelo, and Hazel Levesque. However in the movie, he truly was a villain who only wanted to collect the master bolt from Percy.

In the first film adaption, he is portrayed by Steve Coogan, as Jonathan Raviv played the character off-Broadway.

Hades and his siblings were swallowed by whole by their father, the Titan Kronos out of fear of them becoming adults and overthrowing him. However, their youngest sibling, Zeus, wasn't swallowed whole and was raised somewhere else, and eventually grew up to rescue Hades and the others from their father. Hades and siblings were freed, and worked with Zeus in defeating and overthrowing the Titans, and succeeded.

After defeating the Titans, Hades, Zeus and Poseidon all agreed to divide their father's domain to each other. However, Hades was Kronos' firstborn son, but agreed to divide the domains, as his brother Zeus claimed the Heavens, and Poseidon seized the seas, leaving Hades with ruling the Underworld. Though Hades gained divine authority over the dead and metals and jewels, he became greatly feared by his siblings, nephews, and nieces, and wasn't accepted as an Olympian.

Over the centuries, the Olympians moved west. During World War II, Hades' demigod children were fighting against Zeus. The Oracle predicted that one of the children would either preserve Olympus or raze it to the ground. The gods swore on the River Styx to not father any more children.

However, because Hades already had two demigod children, Zeus ordered Hades to take them to Camp Half-Blood. Hades refused in fear of his son and daughter would turn against him or be killed. In retaliation, Zeus attempted to kill the di Angelo children, but Hades protected them but he could not protect his lover, Maria.

He wished to bring her back from the dead, but he was stopped by Alecto. Hades also cursed the Oracle of Delphi to be trapped forever until he and his children were respected as heroes.

Shortly after Luke Castellan, Thalia Grace, and Annabeth Chase encountered the satyr Grover Underwood, Hades somehow discovered that Thalia was a demigod child of Zeus. Still extremely bitter at his brother for murdering his lover Maria, Hades sends the most terrifying monsters of the Underworld (including all three Furies) to destroy her. The quartet could have escaped from the monsters, except for the fact that a bloodthirsty Cyclops in Brooklyn stopped them, so that the monster army could catch up.

The Cyclops chained Thalia, Luke, and Grover in the air to direct the monsters in their direction, but Annabeth managed to save them by stabbing the Cyclops in the foot. Once the quartet reached Camp Half-Blood Hill, Hades' infernal army finally caught up with them. Thalia told her friends to run to safety, while she, in an act of selfless heroism, fought Hades' army on her own. Zeus took pity on his daughter, and to prevent her soul from going to Hades, Zeus transformed Thalia into a pine tree, just as Halcyon Green had predicted to her. 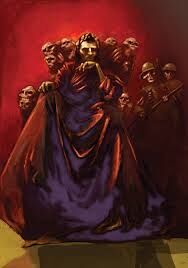 Retrieved from "https://hero.fandom.com/wiki/Hades_(Camp_Half-Blood)?oldid=2038717"
Community content is available under CC-BY-SA unless otherwise noted.