Save the world by imprisoning his mother, Kaguya forever (succeeded)

Hagoromo Ōtsutsuki, also known as The Sage of Six Paths, is the overarching protagonist of the Naruto series. He was a powerful priest who was known in legend as the God of Ninjutsu and the founder and father of the Ninja World. He was also the very first Jinchuuriki of the Ten-Tailed Beast before Ten-Tails split into 9 nine tailed beasts.

He was voiced by legendary voice actor Michael McConnohie, who also voiced Azulongmon in Digimon Tamers, then Keith Silverstein as a young adult, then Fred Tatasciore in the video games, and Doug Stone from episode 463 onwards in the English version, and by Mitsutaka Tachikawa as a teenager, then Masayuki Katō as young adult, and Tōru Nakane in episode 329 in the Japanese version.

Hagoromo was the eldest son of Kaguya Otsutsuki, a princess who took power from the God-Tree and became near-omnipotent. Both he and his younger twin brother Hamura were born with an incredible amount of chakra as a result of their mother's actions and he was blessed with powerful ocular eyes called the Rinnegan which grants the user access to unique and powerful jutsus that are created from gods and goddesses themselves. This made Kaguya angry, as she desired to be the most powerful being in the world.

According to legend, Hagoromo was an extremely powerful ninja with godlike powers who became the founder of the Ninja World. Because of endless wars and bloodshed that occurred by people from the lands from around the world, Hagoromo desired to use his powers and wisdom to explain the truth about chakras and their abilities to bring peace among the lands. Hagoromo traveled around the world to spread his philosophy and religion which were eventually grasped by the people and became known as the Shinobi Sect or Ninjutsu and he was called by the people who desired peace as a Savior of the World.

Hagoromo defeated the most powerful demon in the world called the Ten-Tailed Beast, which was actually the form his mother took when her power became unruly. He sealed the beast inside himself, becoming the very first Jinchuuriki. He was called a god because of his godlike abilities. Nearing his death, Hagoromo feared that once his death comes, the seal will break and the Ten-Tailed Beast will be

released and wreck havoc in the world.

To prevent this from happening, Hagoromo created a jutsu called the Creation of All Things which allowed him to divide up the Ten-Tails into nine individual beasts. He also used a Chibaku Tensei to seal the Ten-Tails' body (along with his mother's will) into a gigantic stoned prison which he hurled into the sky, creating the moon.

He became a father figure to the nine young beasts, and gave names to each of the beasts and told them that even though they are separated, they will always be together, and when the time comes, they will become one again only to have different names and forms then what they were before they knew what true power really is.

On his death bed, Hagoromo had his two sons come before him whom he entrusted his powers, dreams, and legacy to to tell him what true peace is. The older son, Indra, born with the eyes of his father answered that power is the key to obtain true peace, while the younger son, Ashura, born with his father's incredible physical powers, answered that love is the key to achieving true peace. Impressed by Ashura's answer, Hagoromo passed down his legacy to him and died. Angered that his father entitled his legacy to his brother, Indra fought against his brother to obtain his leadership with their descendants continuing the feud down the line. Eventually, Indra became the ancestor of the Uchiha Clan that are blessed with the Sharingan, while Ashura became the ancestor of the Senju Clan that are blessed with powerful physical endurance.

When Hagoromo's descendants Naruto Uzumaki and Sasuke Uchiha were near death, he appeared to them in a realm beyond life and death and explained to them about his origins, his mother, his family, and the importance of stopping Madara's Eye of the Moon Plan. Knowing that the two of them had the best chance of cooperating and ending the cycle of hatred once and for all, he bequeathed to them two halves of his power so they could combat Madara Uchiha as well as revive them.

Hagoromo would later appear before the four Hokage much to their amazement when Hashirama touched the bisected body of Madara, only for him to emerge through use of the first and Madara's Chakra and commented that Ashura's successor is a kindred spirit to summon him. He offered to provide them with the means to save the world from his mother. After Team 7 successfully freed and defused the tailed-beast from Kaguya and touching her with the seals in their palms, Hagoromo would then use the Chibaku Tensei technique to once again imprison his mother and revert her into her Demonic Statue of Outer Path Form to once again forming into a moon which would become her eternal prison once more since ancient times. After the climatic battle with Kaguya was done, Hagoromo, with the help of the four previous Hokage and the former Kages of the Allied Shinobi Villages he summoned from the afterlife, would perform an extremely powerful Summoning Jutsu capable of transporting Team 7 and the freed Nine-tailed beasts back into the main dimension, to where he greets the returning Team 7 and congratulating them on defeating Kaguya and ending the Fourth Shinobi World War for good.

While only little is known about all of his skills, Hagoromo is widely accepted to be the most powerful figure in history, second only to his own mother, having defeated the Ten-Tails with his brother, although Hamura acknowledged his older brother as the stronger of the twins. Hagoromo came to be revered as a god himself after becoming the very first jinchūriki in history, having the Ten-Tails' great power contained within him. In addition, he was the first man to understand the very nature of chakra itself. Hagoromo's wisdom, combined with his kekkei mōra, allowed him to create the original form of ninjutsu, Ninshū. He obtained a great group of followers, as many across the world strove to learn from his teachings. His power even transcended time itself, becoming able to continue observing the world and meet with people long after his death. 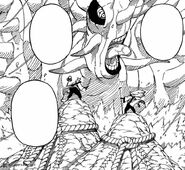 Hagoromo and his brother, Hamura, confront the Ten-Tailed Beast