God of the Swift Amber River
Spirit of the Kohaku River

The spirit of the Kohaku river

Haku is the deuteragonist of the 2001 animated Studio Ghibli film, Spirited Away. He is actually a dragon (but doesn't speak in that form), who disguises as a human boy (in which, on the other hand, he does speak).

He had become Yubaba's apprentice to steal her magic, and he also stole that of her twin sister Zeniba.

Haku is a boy with dark hair in a perfectly shaped bob haircut and green-greyish almond-shaped eyes. He seems to be slightly skinny. He has thin eyebrows and a sharp-pointed nose. He wears a white kimono over a blue shirt and blue trousers. The sash that ties his kimono closed is purple.

Haku is very mysterious, and wise to the ways of the spirit world. He is very stern, but not heartless by any means. He is very kind to Chihiro, and wants to help her; he feeds her and comforts her when she becomes overwhelmed with her feelings, and is patient as she struggles with being brave. Over time, he begins to love her, as well.

When he is near Yubaba, he behaves indifferent or cold to Chihiro so as to not arouse suspicion that they are friends.

He is a young boy who is a river spirit in the form of a human, who helps Chihiro after her parents have transformed into pigs. Haku was once a river spirit who had entered the spirit world seeking to learn magic from Yubaba, and as a result became a worker who followed her every command.

Haku works as Yubaba's direct subordinate, often running errands and performing various missions for her. He has the ability to fly in his true form, which is a dragon. Over the course of the movie his relationship with Chihiro becomes stronger, especially after she learns he is a dragon. This bond eventually leads to them falling in love, for it was their love for each other that broke Zeniba's spell on Haku. Haku was originally the spirit of the Kohaku River and knows Chihiro because he once saved her from drowning. When the river was destroyed and filled in with apartments, he no longer had a home and went to the spirit world, where he became Yubaba's apprentice.

Toward the end of the story, Chihiro recalls her memory of falling into the Kohaku (コハク, Japanese for, "amber") river, of which Haku was the spirit; she thus frees him from Yubaba's service by helping him remember his real name and past, which he had forgotten due to the name change, the curse which Yubaba has placed on him along with his river being filled up. When Yubaba is nearby, Haku is as sharp-voiced and stern to Chihiro as to anyone else.

Both of them return to the bathhouse, and they say their good-byes at the river which has now been filled in.

Haku promises, however, that he and Chihiro would one day meet again as he lets go of her hand and watches her leave to go find her parents. 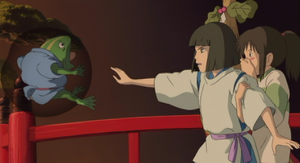 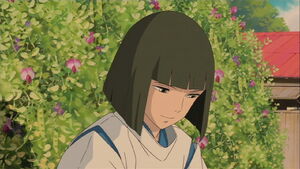 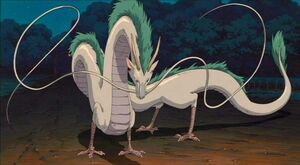 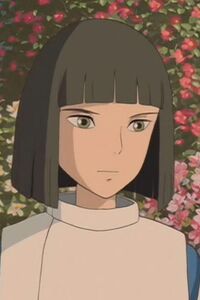 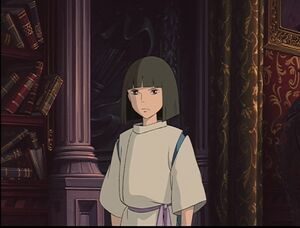