Magi: The Labyrinth of Magic'

First Princess of the Kou Empire

Sewing, Cooking for her brother

Create a unified and peaceful world

Hakuei Ren is a supporting protagonist in the anime/manga series Magi. She is the first Princess of the Kou Empire, and the older sister of Hakuryuu Ren. She is the owner of the Djinn, Paimon. She is a Dungeon Capturer, capturing one Dungeon, and a King Candidate.

Hakuei is a somewhat tall woman with long hair and blue eyes. She has a mole in the same place as Hakuryuu and their mother, Gyokuen Ren, to whom she bears a striking resemblance to. She also wears a metal headband and hair ornaments attached to her bangs.

She wears clothes that are native to her country with metal armor. She also carries a fan with white feathers that is also her metal vessel.

Hakuei is a kind and determined woman with a strong sense of justice. What she seeks is the establishment of a righteous and united world. For the sake of that noble ideal, Hakuei aims for peaceful world unification propelled by the Kou Empire.

Hakuei is a pacifist and aspires for peaceful subjugation through diplomacy rather than conflict. This is because the world she aims for is not one with traces of enmity due to forceful dominion.

Contrary to her appearance, Hakuei displays power in being unshaken in her intentions even when about to be slain. Despite all the evidence to the contrary, she is no naive idealist. Hakuei is generally optimistic, smiling a lot with almost everyone and remaining positive even in the most dire of circumstances. Hakuei is also shown to be caring and loving to her comrades, and most especially to her brother Hakuryuu Ren. She'll do what she can do so that she'll make her brother happy by cooking him some of his favourite foods.

When Hakuei was a child, her father, the First Emperor of the Kou Empire, and two of the princes, her older brothers Hakuyuu and Hakuren, were killed in a fire during a revolt set up by her mother, Gyokuen Ren (though she has only recently learned of this fact).

After the revolt, Gyokuen told to her surviving children that the current Emperor, their paternal uncle, Koutoku, will adopt them and they will become a princess and a prince. After that, Hakuei began to console her mother.

Sometime after this, Hakuei and her assistant Seishun Ri, conquered the Dungeon of Paimon, with her obtaining the Djinn. Also, Hakuei became the General of the Western Subjugation Army of the Kou Empire, which was situated near the residents of the Kouga Clan.

Hakuei, Ryosai, and Seishun Ri set out to go talk to the Kouga Clan. She tries her best to negotiate, but is caught in a trap set by Ryosai. She fights the whole army but soon runs out of Magoi. When she is about to be killed by Ryosai, Aladdin rescues her. After talking to Paimon they separate with Hakuei offering to introduce Judal to Aladdin.

She was seen rushing to the Kou Empire on horses with her Household; Seishun and over 100 members of the Kouga Clan, behind. She went back very fast thanks to the help of her brother's magic,. After a talk with Kouen, they're about to attend the funeral of their uncle and former emperor. After the funeral, she meets with Hakuryuu in which he tells her about their mother and what he plans to do.

Hakuei has a low amount of Magoi. She has also shown some skill in swordplay.

Hakuei's Djinn is Paimon, the Djinn of Maniacal Love and Chaos. Paimon is a Wind Djinn.

Hakuei's Djinn Metal Vessel is a flabellum with a metal handle with feather like appendages. When Hakuei equips with Paimon, she gains gold, pink and white armor.

Hakuei gains the same metal chains Paimon has on her nipples, and her fans transforms to look similar to a trident. Her Djinn allows her to create small and large tornadoes to protect her and attack her enemy. These tornadoes are powerful, but because of her lack of Magoi, it doesn't last long.

Magul Alhazard - When Hakuei uses this Extreme Magic, she creates a huge tornado with her in the middle. The tornado starts to spiral and destroys everything in its path.

Paimon is a fecundity type of Djinn, meaning she is capable of reproducing, which maybe the reason Hakuei's Household consists of Seishun Ri, Dorji, Bator, Boyan, and more than 100 other members of the Kouga Clan. 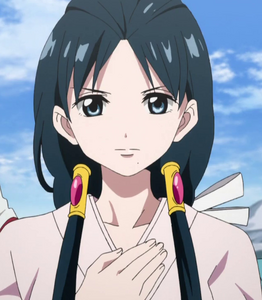 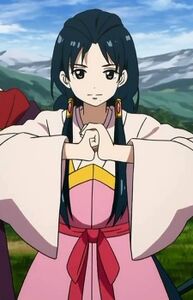 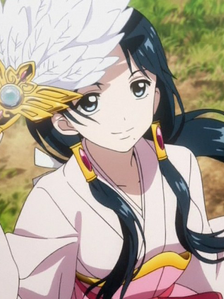 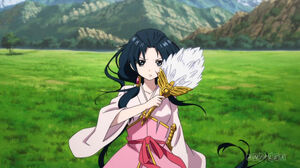 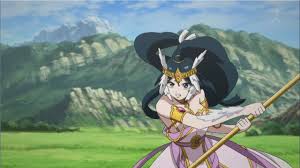 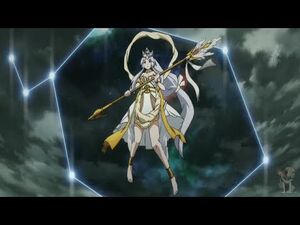 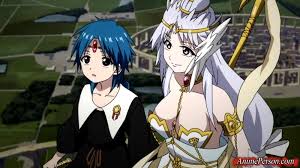 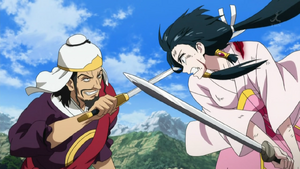 Add a photo to this gallery
Retrieved from "https://hero.fandom.com/wiki/Hakuei_Ren?oldid=1773255"
Community content is available under CC-BY-SA unless otherwise noted.