The White Susano'o
The Ancient Hero

Leader of the Six Heroes

Hakumen is one of the main heroes of BlazBlue. He is the leader of the Six Heroes and is actually an alternate future version of Jin Kisaragi.

Hakumen is a samurai-esque warrior wielding a sword as tall as he is and wearing a mask that completely hides his face. He is an incredibly powerful individual in the BlazBlue universe, so much so that the player is often told to proceed with caution when confronting him, and at times even advised not to do so entirely. His armor (which is the Susano'o Unit), seems to grant him limitless energy and incredible power, and his sword (a Nox Nyctores named "Ookami") appears to bear the capability to kill characters that otherwise would be immortal, or have rapid healing properties that would make them difficult or impossible to kill. This makes him an equally dangerous foe to both mortal men as well as more powerful beings. It seems that Hakumen finds nuclear weapons to be a greater evil than the Black Beast was. This might be because while the Black Beast did spread destruction, it left seithr which became the power source for the future, while nuclear weapons just completely obliterated any life within its radius and leaves the area irradiated and useless.

He is voiced by Tetsuya Kakihara in the Japanese version, and by David Vincent in the English version.

He was the legendary "Silver Knight" who appeared during the First War of Magic, and lead a band of Six Heroes (including himself) that ultimately defeated the Black Beast. Afterwards, Hakumen warned the people to "change their evil ways", but was exiled and sealed in a place called "The Edge" of The Boundary for roughly 90 years.

He was later 'rescued', by Kokonoe, a scientist who often subjects Hakumen to her whims. He finds himself repeatedly aggravated by her meddling, especially when she interferes with his duels by having him teleported elsewhere. While Hakumen is generally a grumpy sort who often attacks characters without provocation, there are a few characters he will tolerate, including Jubei, one of his former comrades among the Six Heroes, and Rachel Alucard, to whom he feels indebted. He also seems to show an intense respect towards Bang Shishigami because of his sense of justice.

It is revealed that Hakumen is, in fact, Jin Kisaragi through hints given to the player during both their respective stories in Calamity Trigger. In one of Jin's endings, he leaps after his brother, Ragna, when Nu-13 latches onto him and jumps into the Cauldron with him at the Gates of Sheol. This thrusts Jin back into the past where he meets Rachel Alucard, who offers to help him become a true hero. From here, his soul is bound to the Susano-o armor, and he becomes Hakumen. Then he goes on to defeat the Black Beast as one of the Six Heroes.

In one of Hakumen's Calamity Trigger endings, he calls Ragna his brother after 'killing' him (though bear in mind this Ragna was only an illusion), and Ragna recognizes him after Hakumen removes his mask to bid farewell to him face-to-face. Hakumen then claims he must denounce his old name, and ends up fighting a shadow of his former self, Jin Kisaragi. He also states that he must do this to repent for killing his brother, implying that Jin, even as Hakumen still cares about Ragna due to lacking possession of Yukianesa.

During Continuum Shift, it's revealed that when he was still Jin, Tsubaki was his secretary instead of Noel and while they had more time together he still left her which ultimately in his neglect lead to her demise, and in respect named one of his techniques after her. He also learns that Kokonoe is storing nuclear warheads, something he fears and despises even more than the Black Beast. Hakumen and Jin try to defeat Mu, but had no success. During the fight, he was relieved that Jin was able to control himself. Sometime after the incident at the Sheol Gates, believing Rachel to be too soft as an observer, Hakumen decides to walk his own path.

After a month passes, Hakumen travels to Ikaruga to put an end to Terumi. Rachel appeals to him a few times to join her, but he refuses cooperation every single time. Hakumen unconsciously wanders to the Snow Town in Akitsu under the effect of the Power of Order and meets Jin. He compliments Jin for making good use of his power and briefly engages him in combat. After the short battle, Hakumen tells Jin about Izayoi, so that he can save Tsubaki from its influence. Jin then asks about Hakumen's timeline, whether Noel and Hazama existed or not. Hakumen confirms that Noel did not originally exist, but wonders why Jin asks about Hazama. Concluding that he has no further answers, Hakumen walks off.

Hakumen later comes across Celica A. Mercury near Kazamotsu's Lakeside Port and saves her from Carl Clover. Overjoyed to finally see someone she knows, Celica wants him to take her to see the other heroes. Hakumen initially refuses, but thinking that she might starves and dies if let be, he decides to at least take her to Valkenhayn. On the way, they encounter Azrael and Hakumen engages him to defend Celica. Seeing no way to end the battle, Celica uses her power like a flare to temporarily blind Azrael, giving them enough time to run away. As they manage to shake him off, they meet Jubei. Hakumen tells Jubei to take Celica to Valkenhayn, but Rachel appears and teleports everyone to her castle for a reunion. As the Heroes finally gathers, Hakumen finally agrees to follow Rachel's plan to stop Terumi once and for all.

As Rachel and Trinity successfully materialized Terumi, Hakumen, Jubei and Celica is teleported to Yabiko to finish him off, but unfortunately, let him slip away as Phantom interrupts them. The Heroes then split to look for Terumi. Trinity manages to find him, but is almost killed if not for Hakumen's intervention. Terumi then traps them in Phantom's Infinite Corridor, saying that they will be fighting his shadows forever. Hakumen deduces from his words that to manifest such perfect shadows, there must be a source of hatred for him close by. Using Amaterasu and Muchōrin's power, Hakumen and Trinity bypass the barrier and confront its creator, Phantom, directly; Hakumen recognizes her as Nine. Trinity attempts to dispel the Mind Eater on her, but something strange happens as she finishes.

In the finale, Hakumen and Trinity head to the Monolith and split up, with Hakumen heading to the Monolith's base to destroy it and Trinity awaiting the moment when Hazama is the most vulnerable. Hakumen later encounters Terumi and, by using his Time Killer technique, kills all the "time" that Terumi possessed, destroying him once and for all. He then attempts to destroy the Monolith's foundation, but his weakened state leaves him unable to do so until Jin Kisaragi shows up and the two combine their Kokujin: Yukikaze techniques to slice through the foundation. After Take-Mikazuchi is stopped, Hakumen warns Ragna and Celica that Nu will only cause more evil as long as she remains alive and attempts to kill her, only to be stopped by them. Izanami then appears alongside Phantom and Hakumen attempts Time Killer on her as well, only for it to be completely ineffective. Izanami then has Phantom teleport Hakumen away to an unknown location.

Hakumen follows a rather unique blend of cyborg and samurai. He wears semi-heavy white armor and a muscular body suit with a large collar and the traditional hakama present, ballooning pants common in samurai. His long bright blue hair is tied at the mane. All armored sections feature fully-functional crimson eyes with slit pupils. These eyes are not as much of an intimidation as much as the mask he wears; a completely white, two horned helmet with no features or visor, appearing to have no face at all, a feature that paralyzes even Ragna in fear.

When he was in Amane Nishiki's Astral Heat, he appear to be as unknown cat-like figure with one strand of sliver hair with writing on his stomach, and carries his weapon.

Hakumen devotes his entire life to destroying the evils that corrupt the world, and wants to erase those he believes should not exist. He is a serious, no-nonsense sort who maintains a calm and collected presence, rarely letting things get to his head. However, he is also quite prideful and even arrogant sometimes, to the point of occasionally getting him into issues. He prefers to do things on his own, and hates to rely on others' assistance with anything. Despite being a powerful warrior, he is not without mercy, and even spared Ragna when he was injured.

Being the future version of Jin Kisaragi, it's no surprise that the two share similar personality traits. Both are cold at times, but Hakumen is more focused rather than distant. He is essentially what Jin would be without the influence of Yukianesa or anyone else manipulating him. He knows that it is his destiny to destroy Ragna, being the bearer of the Power of Order, yet hates every bit of this fact, showing that he still cares about his brother.

The only time he has ever dropped his calm and focused persona is during his Bad Ending, where Hazama cruelly tortures Tsubaki. Having lost Tsubaki previously and still loving her to the day, he displays extreme rage when anyone hurts her.

In Chrono Phantasma, judging from his speech patterns, he has mellowed somewhat.

Being one of the Six Heroes, Hakumen possesses exceptional strength incomprehensible to the norm. The armor, Sankishin Susano'o, bestows him with incredible fighting prowess, allowing him to tap into infinite reserves of power, enabling him to fight for prolonged periods of time without rest and to increase his own strength. The various eyes adorned all over the armor suggest that they are for sight enhancement as the helmet features no visor.

His weapon of choice is Nox Nyctores, Ookami, a nodachi with an odd blunt tip in place of a sharp point. The sword is attached to a sheath on his back with a slot to allow him to draw the sword without straining his arm due to its long length. Hakumen repeatedly claims that despite its cursed nature, it is a weapon meant to destroy evil, hinting that it may have holy properties. It apparently possesses the ability to negate ars magus as well. Hakumen's Drive, Zanshin, allows him to project energy barriers that repel enemy attacks and allow him to effectively counter advances towards him. Unlike the other characters who have a Heat Gauge, Hakumen uses a special 8-point gauge named Magatama, that allows him to pull off all of his special attacks, which automatically fills up or can be filled up by countering attacks. While using unlimited form his gauge will regenerate faster. In addition, whenever Hakumen's sword attacks clash with a projectile, he leaves behind a large vacuum crest known as Fumajin (Earthbind) at the point where the clash took place. Not only can it absorb all projectiles but it can also damage his opponent if they touch it though this will cancel it out. 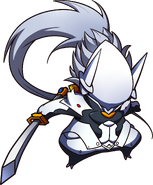 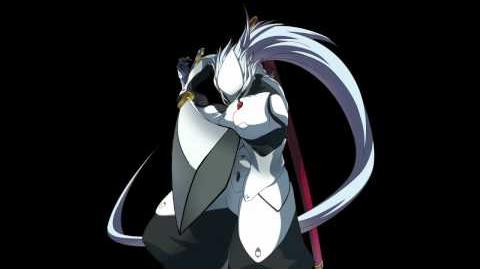 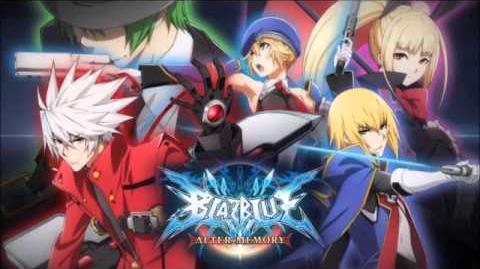