Hakuraku (狛楽) is an old man who can summon ninja dogs called Ninken to fight for himand a minor hero in the 2002 videogame Shinobi. He too is a member of a legendary group of ninja warriors known as the Oboro Clan.

Hakuraku is not a fighter, summoning his dogs to do battle on his behalf, and if anyone who challenges him gets too close or if he has been hit, he will hide in the large box he carries and teleport from one part of the arena to another. He was shown to be very reluctant (or possibly fearful) when battling, constantly shouting, “Stay away from me!”. He is a peaceful elderly man who repsects everyone in his clan including his leader Hotsuma.

A year later, the Oboro Clan were attacked and viciously killed by the invading forces of the Hellspawn unleashed by the mad sorcerer Hiruko Ubusuna who then revived and turned them into his reluctant slaves. Hakuraku among the casualities was not so fortunate as he was forced by Hiruko to attack and kill people.

Hotsuma returns to avenge the deaths of his clansmen and confronted the possessed Hakuraku and his dogs that are turned into Hellspawns in the damaged subways of Tokyo during the Hellspawn invasion. In the end, he thanks Hotsuma for killing him and allowing him to rest in peace. 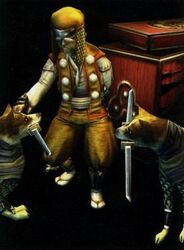 Hakuraku petting his ninja dogs called Ninken.
Add a photo to this gallery
Retrieved from "https://hero.fandom.com/wiki/Hakuraku?oldid=1600794"
Community content is available under CC-BY-SA unless otherwise noted.