She is voiced by Amy Bruckner.

Like Jake, Haley also has dragon powers. A prodigy in everything else, her dragon heritage, while not yet fully developed, start to express themselves at a much earlier age than Jake's did. Part of that may be due to dragon girls developing their powers earlier than boys, as her mother Susan Long, explained.

Haley takes pride in exposing Jake's mischievous behavior to their parents, as well as showing off her own "superior" talents. At first only able to express isolated parts of her dragon form, such as her claws, snout, wings or tail. after about a year she was already able to perform a full body morph into her adolescent dragon form, prompting her to begin her own dragon training under Sun Park's guidance as the reserve or substitute American Dragon should Jake be unable to fully perform his duties. Haley took many aspects of her training with Sun Park and applied them in her daily life, which put her at odds when compared with average and normal human kids her age. 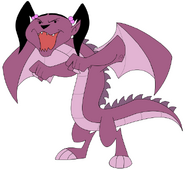 Retrieved from "https://hero.fandom.com/wiki/Haley_Long?oldid=1881672"
Community content is available under CC-BY-SA unless otherwise noted.