Heroes Wiki
Register
Don't have an account?
Sign In
Advertisement
in: Articles under construction, Male, Honorable,
and 26 more

In bear form: Claws and teeth

To help Merida save their mother.

Hamish, Hubert, and Harris are a group of young triplet princes from the Disney/Pixar movie, Brave. They are the little brothers of Princess Merida, and the sons of King Fergus and Queen Elinor.

They are first seen stealing tarts from their nursemaid, Maudie as their older sister, Merida describes them as "Wee Devils" that could "get away with murder". One night, they are at the dinner table listening to their father, King Fergus telling the story of how he lost his leg to the demon bear Mor'du until Merida interrupts; telling them the best part and the ending. They play with their haggis which they refuse to eat as their mother, Queen Elinor tells them to try them. Merida was kind enough to sneak the large plate of tarts under the table for them. They sneak under the table and eat them and decide to tie Fergus' leg to the table post. When Elinor has something to discuss with Merida, she tells her sons that they are excused and they leave quickly with tarts stuffed in their shirts and one of them trips spilling some with the two deerhounds chasing them. At the presentation of the suitors, they prank a guard before they sit in their bench throne until the brawl breaks out and they sneak through the floor and make the brawl continue by smashing Lord Dingwall's foot and conking a guard on the head. Later at the Highland Games, they sneak in and once again successfully steal a plateful of tarts from Maudie in a barrel.

That night, they are caught messing with the trophies in Fergus' trophy room by Elinor who was just turned into a bear. They put the trophies back as Merida enters the room asking for their help to sneak out of the castle. When they give a look asking what's in it for them, she offers they could have her dessert for 3 weeks, but they want more than that so she says for a year and finally, they agree to help. They drive Fergus, the Lords, and the guards away on top of a tower and lock them outside and scare Maudie and two other servants out of the kitchen. As Merida and Elinor leave, Merida tells them to help themselves to anything in the kitchen. So the triplets eye the cursed cake that Merida gave to her mom that turned her into a bear.

The next night, they have been turned into bear cubs and come to help their sister by retrieving the key from Maudie to get Merida out of the tapestry room. They do so and the four of them ride Angus through the forest to save their mother from Fergus' rage. They reach her in time and try to attack Fergus but Merida stops them and then Fergus is convinced it was his sons after she calls them "boys" until Mor'du appears. He attacks Fergus, the Lords, and the guards until he nearly kills Merida until Elinor breaks free from the ropes and fights him as the triplets watch in horror. After Mor'du is killed, they watch as Merida puts the mended tapestry around Elinor hoping it would change her back. When nothing happens, Merida tearfully begs her to change back as they are also sad too. Then, Elinor changes back to human as the triplets are human again too, while running naked to their family; much to the Lords' shock, and are reunited with their family.

Sometime later, they are at the harbor saying goodbye to the Lords and decide to stowaway on a ship, wave goodbye, and Fergus rides a boat to go retrieve them.

They are mentioned in Once Upon a Time. After their father had passed away, their older sister Merida assumes the throne as Queen of DunBroch, however the neighboring clans no longer approved of a woman leading them by herself. So they kidnap the boys, and Merida allies herself with Belle to rescue them. The clans aim their arrows at the brothers who are tied to the stake, but are saved by Merida who is able to shoot an arrow through the arrows aimed at them. The three are freed and reunited with their sister.

Emma mentions that they didn't come to Storybrooke, but adds that they are safe and sound by their mother's side. 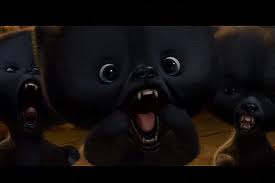