To bring the cookie RJ calls junk back (succeeded)

Hammy is a hyperactive red squirrel whose mouth moves as fast as his feet. He is innocent, but intelligent (despite acting dim-witted many times). His intellect is shown, when, while he's moving really fast due to drinking an energy drink, he sets everything up so that Vincent, Gladys Sharp and Dwayne LaFontant are all simultaneously defeated. He is also curious and very childish in nature, with an extremely short attention span. He often gets on the nerves of those around him, but endears himself to them at the same time. Hammy can run at the speed of light and has fast reflexes. He's obsessed with cookies and loves to drink energy drinks.

Upon first meeting RJ, Hammy became extremely fond of him, completely naive at the fact that RJ was using them. In the scene where the world stops turning due to Hammy drinking soda, he moves ahead as the others freeze. He adjusts the laser trap lengths, turns on the lasers, retrieves the chocolate-chip cookie from the roof and eats the cookie while going back to the hedge and then the world resumes turning.

Hammy points at the hedge

Hammy points the hedge to Verne.

Hammy flattened by a book 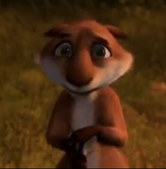 Hammy outwalks lasers after drinking caffeine--he's going faster than the speed of light.