Heroes Wiki
Register
Don't have an account?
Sign In
Advertisement
in: Articles under construction, Determinators, Sidekicks,
and 31 more

All of Us Are Dead

Protect his friends (succeeded until his death).

Han Gyeong-su is a supporting character in the Korean/Netflix series All of Us Are Dead.

He was portrayed by Ham Sung-min.

Han Gyeong-su is the one of the bravest characters in All of Us Are Dead who protected his friends Then Na-yeon infected him with a handkerchief then he turned into the zombie then Cheong-san jump then Gyeong-su fell of the broadcasting room he then runs off.

Han Gyeong-su was the best friend of Lee Cheong-san and Lee Su-hyeok he protected his friends but when he said he was innocent Na-yeon didn't believe him, so she infected him, to get rid of him after that Cheong-san got himself on the knot and Gyeong-su didn't catch him so he felled down then runs off which made he was biting people even, Cheong-san's mom then he died in the explosion of Hyosan High school, which cause him to die in the explosion. 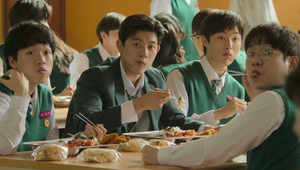