Heroes Wiki
Register
Don't have an account?
Sign In
Advertisement
in: Female, Voice of Reason, Tragic,
and 10 more

Raising her only son (teenager)

Raising her son (as a teenager)

Reuniting with Michiko (all succeeded)

Child hero
Hana "Hatchin" Morenos is a protagonist in the anime Michiko and Hatchin. Hana is an orphan and was abused by her adoptive family, each of whom subject her to being degraded and exploited.

In the episode 1, Hana was a weak little girl, constantly putting up with all of her adoptive family's cruelty towards her; despite this however, Hana does eventually stand up for herself against her two adoptive siblings: throwing off Gabriel from her back when he rides her like a horse; beating Maria up after attempting to steam press Hana's face with an iron and throwing her out of the house. Throughout the series, Hana learns to stand up for herself when Michiko isn't around and had to fend for herself, especially against ruthless individuals like Satoshi Batista.

Hana had a chance encounter with Michiko (whom busted into their home and needed her help to find Hiroshi) and runs away from her adoptive family; although the two have clashed in the beginning of their journey, Hana grows to care about Michiko and was saddened when they had to part ways in the final episode (though even after the 7 year time-gap) Hana and Michiko ultimately reunited and embraced one-another.

Hana was initailly piqued by the prospect of meeting her biological father, Hiroshi Morenos, after having an image of him coming out of a truck to "come pick her up after all these years", but dismissed it as a fantasy. On a related note, Hana is shown to be an insightful little girl, much unlike the other characters (via Michiko and Satoshi), where she as able to deduce Hiroshi for the person he was, despite never encountering him in that point in time.

In the Epilogue, Hana becomes a happy single mother and plays with her only son, Julio Morenos, on her off days. 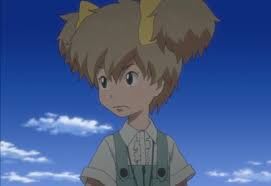 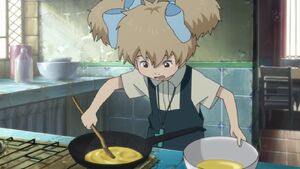 Hana cooking in the kitchen 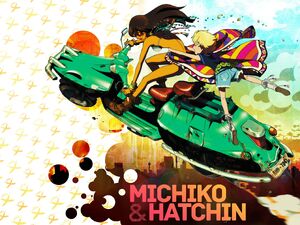 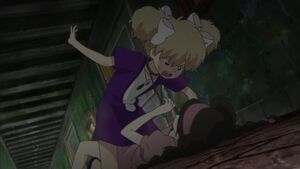 Hana standing up for herself 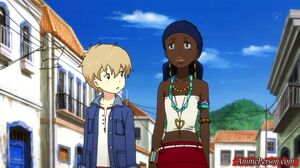 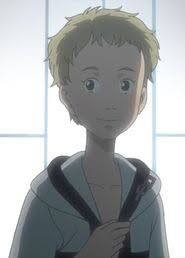 Hana as a teenager