Liberate the humans within the Walls from the Titans (succeeded).
Stop the Rumbling and save the world (posthumously succeeded).
Save Paradis from the world's hatred and revenge (abandoned, entrusted to Armin).

She is voiced by Romi Park in the Japanese version of the anime and Jessica Calvello in the English version, the former of whom also voices Edward Elric, Naoto Shirogane, and Tōshirō Hitsugaya.

Hanji is very passionate and driven in pursuit of new knowledge. She can be seen as very hyperactive, often diving into projects without thought for personal safety (and frightening lots of her subordinates in the process), instead preoccupied with observing and documenting their subjects. Some misunderstands these acts of hers as eccentric and having more than a few screws loose in her head. She also enjoys discussing this research, but as the lectures can be very long and detail-oriented, not many fellow soldiers find them interesting.

Hanji is often excited by Titans and is always eager to experiment with them, coming off as extremely emotional regarding titans. For example, she cried at the amount of pain being caused to a Titan during experimentation.

She explained this sympathetic reaction to Eren as a result of the drive to see titans from a different perspective and learn new insights that would normally be overlooked from the traditional view of rage.

However, she still cares deeply for humanity, and takes threats to comrades very seriously, as seen when Pastor Nick is confronted for his coverup of the Wall. When he refused to talk, Hanji grabbed him and held him over the side of Wall Sina, explaining that lives were lost because of him and his religious faction and stating an utter contempt for the priest.

Hanji Zoe is introduced as part of the group assigned to take Eren to his military hearing in front of the leaders of the military. She is present with the rest of the Scouting Legion as Levi beats up Eren and checks on his condition after the tribunal is over, noting that the gap where Eren lost his tooth earlier is disappearing quickly.

Though in charge of experimenting with captured Titans Sawney and Bean, no conclusive evidence was obtained. As such, she's excited by the prospect of working with Eren.

Later, when Eren and the Special Operations Squad are at the former Scouting Legion HQ, Hanji begins to prep Eren on previous experiments, but ends up talking until morning when the conversation is interrupted. She was about to talk about the curious precedent involving Ilse Langner when it was discovered that Bean and Sonny were murdered.

Although devastated by the loss of the test subjects, she moves forward with the experiments on Eren. When it turns out Eren cannot turn into a titan at will, Hanji is a little disheartened. However, seeing Eren's titan hand later on earned an overly-excited response, breaking the tension between Eren and the Special Operations Squad.

She discovered that Eren's titan powers are only awakened when he has a clear objective in mind, such as defending against the cannonball. She also theorized that this switch must have a good reason as well as being connected to the titan's nature.

Hanji stops Keiji from continuing to try and open the crystal Annie Leonhardt put around themselves to avoid capture. She ordered the crystal containing Annie to be removed to safety when they notice the titan within Wall Shina.

Before Hanji can react, Pastor Nick hurries over and begs the soldiers to stop sunlight from hitting the titan's face. After this, Hanji tries to question the Pastor about what they had just seen, but he roughly states that they do not need to know anything about it and even threatens to demand compensation for damages done to his church.

Furious at his attitude, she grabs hold of Nick and dangles him over the side of the wall in a threat, demanding that Nick explain why there are titans inside the Wall. She comes to the conclusion that his religion has been so opposed to Wall modifications because of what they know is inside the Wall. She explains that the people of the Scouting Legion sacrifice their lives hoping that one day it will mean something, and that because of this they have the right to know what they saw inside the wall and why it's there.

Pastor Nick would rather die in order to maintain his secrets, but Hanji decides to let him live. He finally tells her and the other members of the Scouting Legion about Historia knowing more about the walls having titans in them. She went under an assumed name after she was caught in the middle of her relatives' dispute, and will tell them more about it, if she chooses to.

After Hanji's squad rescue the Scouts trapped at Castle Utgard, she tells everyone that it's time to go. The Scouts begin to leave. After seeing Mikasa try and kill Reiner and Berthold, Hanji proceeds to attack the Colossal titan and held up well until the titan began to emanate burning gas.

Unable to continue the attack, she instead leads an effort to back up Eren in his battle against the Armored Titan. Remembering ancient history concerning armor, Hanji is able to accurately deduct that the seemingly-invulnerable Armored Titan has unprotected areas at the joints to allow freedom of movement. This allows Eren and Mikasa to bring him down, but the Colossal Titan drops from the Wall and knocks almost unconscious in the resulting explosion.

Hanji is later shown to be among the wounded, and has to be left behind when the main forces begin their pursuit. However, she is able to correctly predict that the enemy will require a place to rest until sunset, and advises them to head for the Forest of Giant Trees. 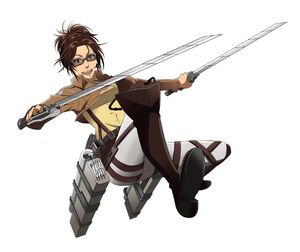 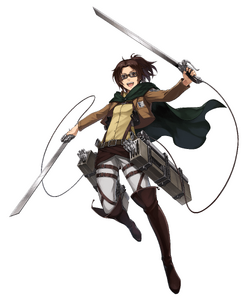 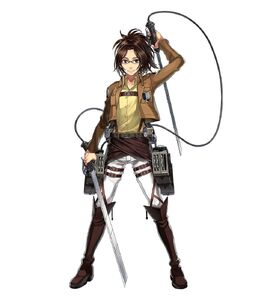 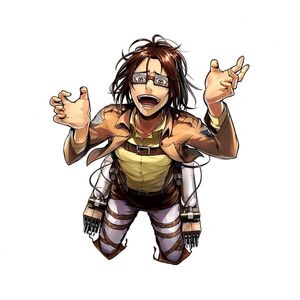 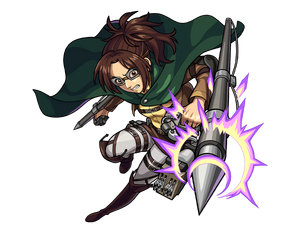 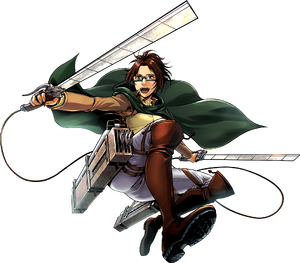 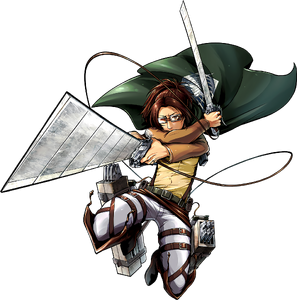 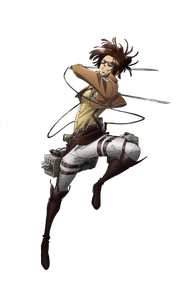 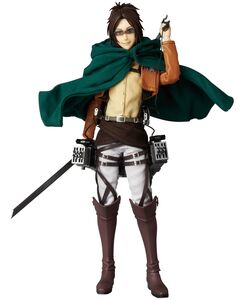 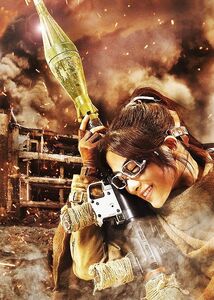 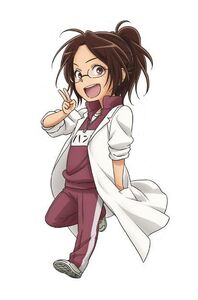 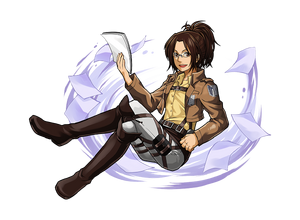 Hange in Puzzles and Dragons 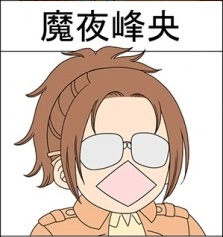