Hank is the deuteragonist of Finding Dory. His inspirations are Gill and Gurgi.

He is a 'septopus', an octopus with seven tentacles instead of eight who reluctantly helps out Dory in reuniting with her family, all the while trying to get her tag so that he can go to an aquarium in Cleveland.

He is voiced by Ed O'Neill, who is famous for portraying Jay Pritchett in the ABC sitcom, Modern Family.

Hank first appears in the film in Dory's tank room in the Marine Life Institute, planning to escape into Quarantine so he can live a life of solitude in Cleaveland. To do so, all he needs is a tag, which Dory has. He decides to help Dory find her family as long as she gives her tag in return.

Hank takes her through the building, but Dory's clumsiness causes her to fall into a bucket of fish food for Destiny, who tells her she's from the Open Ocean exhibit. Dory decides not to go through the pipes and with Hank, as she thinks she'll get herself lost without company.

Dory and Hank use a baby stroller to find the Open Ocean Exhibit, but Dory's interest in glasses causes them to fall into a touching tank, where Hank shows his fear of being touched by humans. Dory calms him down by telling him to keep swimming, only for him to release ink upon being poked, scaring all the kids away.

Dory and Hank finally make it to the Open Ocean Exhibit, where Dory thanks Hank for helping her by giving Hank her tag. Hank tells Dory he thinks she's ready before dumping her into the tank, but not before he tells her that he will have a hard time forgetting about her when Dory states that she thinks she'll remember him, finally revealing the softer, sweeter side of his personality.

Hank later appears in Quarantine and helps Dory, Marlin, and Nemo get to the Blue Tang tank, telling Dory to hurry as the truck leaves in 3 minutes. When Dory starts to hallucinate upon hearing her parents may be dead, Hank finally loses his patience and scoops Dory from the tank, leaving Marlin and Nemo in the tank by accident, only to drop the beaker carrying Dory when a human tries to grab him, sending Dory down a drain and back into the ocean where she finds her parents.

In the truck to Cleaveland, Marlin and Nemo spot a fish they think is Dory, only for it to be a camouflaged Hank. He sadly apologizes for losing her as the doors close.

A group of otters and Dory break into the truck, and try to save Marlin and Nemo, only for Becky to appear and carry her bucket with Marlin and Nemo away, leaving Dory in the truck with Hank. Dory asks Hank to come live in the ocean with her; at first he refuses, but eventually accepts, possibly upon realizing that he'd rather be in the ocean with those he cares about instead of being in a glass box all alone.

Hank scares off the truck drivers and drives the truck around towards the ocean, only for it to fall off a cliff into the water, freeing all of the fish. At the end of the film, Hank becomes Mr. Ray's substitute while the latter joins the stingray migration. Hank says that if Mr. Ray is smart, he would stay away from the class as long as possible, implying that he likes his new position. 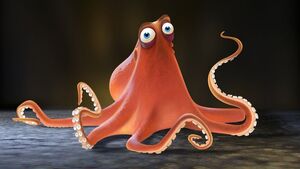 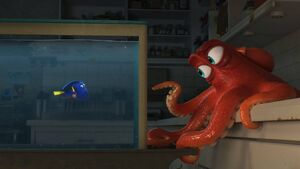 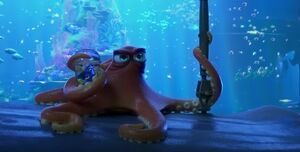 Hank and his friends on the Finding Dory Blu-ray