Goosebumps - The Ghost Next Door, Goosebumps (2015)

Going to an abandoned Funfair and watching the sunset from a ferris wheel.

To save Danny from an Evil Shadow Figure and get all of R.L. Stine's monsters back in the books (all succeeded).

Hannah "Stine" Fairchild is the heroine of Goosebumps: The Ghost Next Door and the tritagonist from the 2015 Goosebumps movie. She is also Zach Cooper's neighbor and love interest. Her true identity is that of Hannah Fairchild the titular protagonist of the book of the same name brought to life by Stine himself.

Hannah is played by Israeli actress Odeya Rush in the film and Nicole Dicker in the Television Series.

The Ghost Next Door

Hannah Fairchild is a Ghost (without Knowing that she is) In the Goosebumps Book and Television Episode The Ghost Next Door. She is sent down from Heaven to save her friend Danny from a Shadowy Figure (Which, In the Book is revealed to be an Evil Version of Danny) before it's too Late.

Hannah Fairchild, going by the name of Hannah Stine, is the adopted daughter of famous author R.L. Stine. She understands why he is hiding his work and keeping people, including his new neighbor Zach, away from his property.

When the boy moves into her father's mansion, he makes the mistake of opening a Goosebumps manuscript, revealing the monstrous Abominable Snowman of Pasadena. Suddenly, the other monsters are released, including the worst of them all, Slappy the Dummy. It's up to Hannah, her father, and Zach, along with some new friends, to bring the villains to justice. She is revealed to be a ghost.

Hannah doesn't appear in the sequel, so it's unknown if she still lives with R.L. Stine, and thus, if she was sucked inside Slappy's magical book alongside Stine. 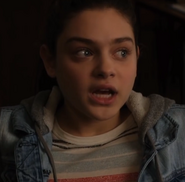 Hannah Fairchild in Goosebumps The Ghost Next Door 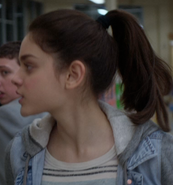 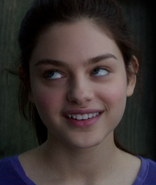 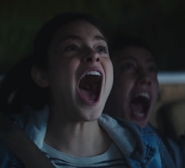 Hannah lunging for the book. 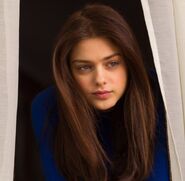