To escape from the witch (succeeded)

Each other, their father, the white duck, the witch (formerly)

The witch, their step-mother

Hansel and Gretel are the titular protagonists of the Grimm fairy tale of the same name. They are intelligent children who get captured by a cannibalistic witch but manage to outwit the witch, roasts her instead and return home alive.

Hansel and Gretel are the children of a poor woodcutter. When their mother died, their father married another woman, who became their step-mother. However, the step-mother hates children, and therefore convinced her husband to abandon his children in the woods, where they will starve to death or get eaten by wild animals. The woodcutter at first did not want to abandon his children, but the step-mother told him that they will die otherwise. Gretel, who heard the step-mother's intention to abandon them, started to cry, but Hansel, her brother, comforted her by saying that he will find a way to save themselves. When their father and step-mother were asleep, Hansel collected shiny pebbles and put them in his pocket, so they will be able to go back home.

In the morning, the step-mother woke them up, and while they were walking, unknown to the parents, Hansel scattered the pebbles on the road, so he and Gretel will be able to find their way home. When they went deep in the woods, the woodcutter and his wife left Hansel and Gretel and did not come back. However, thanks to the pebbles, Hansel and Gretel found their way home. The evil step-mother was shocked to see Hansel and Gretel, but their father, on the other hand, was very happy to see his children. However, in that night, the step-mother locked the door of the children's room, so that Hansel could not collect the pebbles like in the night before. Meanwhile, the step-mother forced the woodcutter to agree that they will abandon the children in the woods again. Gretel, who heard once again the step-mother's intention to abandon them, started to cry, and her brother, who wanted to collect the pebbles like in the night before, could not go out. Nevertheless, he comforted his sister, saying that God may help them.

In the third day, Hansel and Gretel saw a bird white as the snow sitting on a branch and singing so beautifully, that they listened to it, and when it ended its song, it flew near them and Hansel and Gretel went after it to a house. And the house wasn't just an ordinary house, it was made of bread and covered with cakes and sweets, and the windows were made out of white sugar. As Hansel and Gretel ate the sweets in the candy house, the door opened and an old woman came out from the house, walking toward them with her crutches supporting her. Hansel and Gretel were so fightened, that they dropped everything they had in their hands. The old woman said that they may go inside and nothing bad will happen to them, and then she brought them inside the house, where a good meal was already prepared. Later, the old woman also offered Hansel and Gretel two beds to sleep in, and when the children lay down in the bed, they imagined themselved in Heaven.

But this old woman only pretended to be nice to the children, and in fact she was an evil witch, who lurked the children and built the candy house to attract them, and after this she will cook the children and eat them. It is said that witches have red eyes, and that they can't see well, but they have a strong sense of smell like animals, and they smell a human immediately when he\she approaches them. And when Hansel and Gretel approached the house where the witch lives, she cackled evilly and said that they will not escape from her.

In the morning, the witch woke up before Hansel and Gretel, and when she saw the children sleeping, she said that they would be a nice meal for her. Then the witch grabbed Hansel and took him into a room with a cage and locked him up inside the cage. Hansel cried for help, but to no avail. Later, she woke up Gretel and forced her to cook food for her brother, so he will get fat and therefore will be good for the witch to eat. Gretel cried miserably, but she did not have anyone who heard her, and she was forced to do everything that the witch ordered her to do.

The witch cooked the best meals for Hansel so he will get fat, but to Gretel she only cooked meager meals. In every morning, the witch came to the cage to see if Hansel got fat, but he tricked her by giving her a bone, and the witch, who could not see very well, did not see the bone and she thought it is his finger, and the witch wondered why he is not getting fat after eating her good meals. After four weeks, the witch decided to cook and eat Hansel, whether he is fat or not. The witch ordered Gretel to bring her water so she could cook and eat him. Gretel cried miserably as  she brought the water to the witch.

After putting the water and setting the pot on the fire, the witch also planned to eat Gretel, as when Gretel would be inside the oven, the witch will lock her inside, cook her and eat her as well, but Gretel found out what the witch is planning and said that she does not know how to get inside the oven. The witch said that the oven is big, and even the witch can get inside. As the witch bent down to see if the fire is hot enough, Gretel shoves her into the oven and locked her up inside. The witch screamed as she burned, until she burned completely and turned into ash.

When their arrived at their house, the woodcutter, their father, hugged them as they entered the house. He then revealed to Hansel and Gretel how miserable he was after abandoning them in the forest and that the step-mother died while the kids were absent (in some versions, the step-mother ran away from the woodcutter and never returned). Hansel and Gretel showed their father the gems and the gold they collected from the now-deceased witch's house. Since then, thanks to the gems and gold, Hansel, Gretel and their father lived happily ever after. 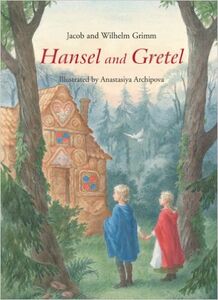 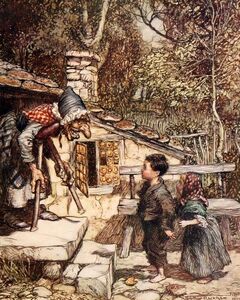 Hansel and Gretel with the Witch 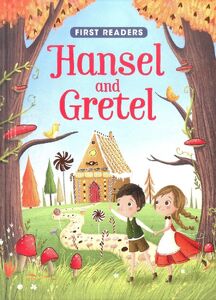 Hansel and Gretel in a storybook for children 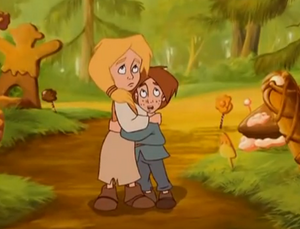 Retrieved from "https://hero.fandom.com/wiki/Hansel_%26_Gretel_(Brothers_Grimm)?oldid=2311540"
Community content is available under CC-BY-SA unless otherwise noted.