Hansel and Gretel was born to Adrianna and her husband. Hansel is her only brother. They grew up in a small cottage in the forest in outside Augsburg. Not much is known about their childhood. It is likely after the encounter with the Candy Witch in the Gingerbread House that Gretel and Hansel must spent their childhood learning about witchcraft and witches.

As we are introduced to the older Hansel, we notice that  he is very strong and very brave. It seems that he is very much in love with his job of witch hunting; this is seen in a deleted scene where Hansel is telling a woman of a witch that he killed, but the woman showed no interest and left for her friends. Being dependent on insulin every few hours, he is sometimes good with scheduling.

From the very beginning, Gretel proves to be more than capable. She's very resourceful and intuitive; this is seen as Gretel uses a nail to unlock herself from the Candy Witch's lock. She is very brave, even as a child. As we are introduced to older Hansel and Gretel, we see a woman who is smart, cunning, strong, kind, and knows how to take care of herself.

Abandoned by their father deep in a forest, young Hansel and Gretel enter a gingerbread house and are nabbed by the old witch who resides in it. The witch forces Hansel to continuously eat candy while making Gretel prepare the oven, but the siblings outsmart her and shove her into the oven's fire, incinerating her. Throughout the fifteen years after the incident, Hansel and Gretel become famed bounty hunters dedicated to mercilessly eradicating witches, slaying over six hundred of them. Their work is relatively easy because, for an unknown reason, they are immune to spells and curses. Hansel, however, is diabetic as a result of his ordeal and needs to take a regular shot of insulin every few hours.

One day, in the town of Augsburg, Hansel and Gretel prevent Sheriff Berringer from executing Mina, a young woman accused of witchcraft. Mayor Englemann has hired the siblings to find and rescue several children abducted by witches. Berringer hires trackers for the same mission, hoping to show up the mayor for hiring Hansel and Gretel and to maintain his power in the town. However, all but one of the party are killed that night by the powerful grand witch Muriel, who sends the surviving member back to the town tavern to explode as a warning to the locals. Hansel and Gretel, with the help of the Mayor's deputy Jackson, capture Horned witch and interrogate her. They discover that the witches are preparing for the ritual of Blood Moon, which requires sacrificing six boys and six girls, each born on a separate month. Suddenly, Muriel, Redhead witch, and a troll named Edward, attack the town and abduct the targeted girl. Muriel makes Jackson shoot himself, while Gretel is knocked unconscious but is brought to safety by a teenager named Ben, their local fanboy and an aspiring witch hunter. Hansel grabs a fleeing witch by her broomstick, but falls and is lost in the forest.

The next morning, Hansel is stuck in a tree while hanging upside down. Mina finds him and takes him to a spring, where she heals his wounds and has sex with him. Meanwhile, Gretel enters the forest to search for him, but she is ambushed by Berringer and his enforcers. After the men beat her up, she is rescued when Edward, the witches' troll servant, intervenes to kill the Sheriff and his goons and mend her injuries. When Gretel asks why he saved her, Edward answers that trolls serve witches and walks away. Hansel and Gretel reunite at an abandoned cabin, which they discover is not only their childhood home, but also a witch's lair. Muriel appears in front of them, telling them the truth of their past. She reveals that Hansel and Gretel's mother was a grand white witch named Adrianna, married to a farmer. On the night of the Blood Moon, the heart of a grand white witch is needed to create a potion that would make dark witches impervious to fire. As Adrianna was too powerful, Muriel targeted Gretel, who was revealed to be a grand white witch herself. Muriel spread a rumor across the village about Adrianna; to keep the siblings away from the lynch mob, their father left them in the forest before he was hanged, while their mother was burned at the stake. Following this revelation, the siblings battle Muriel before she stabs Hansel and abducts Gretel for the ceremony.

Hansel wakes up to the sight of Mina, who reveals herself to be a white witch. After Mina uses Adrianna's spellbook to bless the siblings' arsenal, Hansel, Mina, and Ben head to disrupt the Blood Moon Sabbath. Whilst Mina mows down many dark witches with a Gatling gun, Hansel squares off against Muriel's minions and frees the children, while Edward defies Muriel's orders and releases Gretel before Muriel throws him off the cliff. Muriel attempts to flee, but Ben shoots her off her broomstick. On her way to meet up with Hansel, Gretel finds Edward and uses her stun gun to defibrillate him back to life. Hansel, Ben, and Mina follow Muriel's trail to the old gingerbread house. During the confrontation, Ben is wounded and Muriel fatally stabs Mina. The siblings then engage in a grueling fight against Muriel inside the gingerbread house, until they behead her with a shovel. In the end, Hansel and Gretel collect the rest of their reward for rescuing the children before embarking on their next hunt, with Ben and Edward joining them. 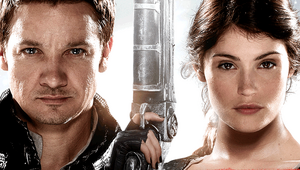 Lost in the forest. 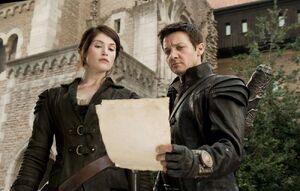 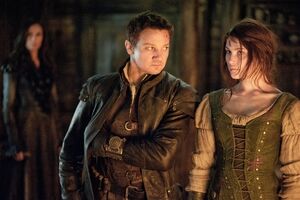 Hansel & Gretel as they listen to Muriel.
Community content is available under CC-BY-SA unless otherwise noted.
Advertisement