Higurashi: When They Cry

Hanyū Furude, (real name Hai-Ryūn leasomūru Jeda) also known as Oyashiro-sama is the overarching protagonist of Higurashi: When They Cry. She is a female goddess that appears in Minagoroshi-hen and beyond. Hanyuu's past is shrouded in mystery, but she referred to herself as a human who became a god after she was sacrificed at a true Watanagashi ceremony centuries ago to atone for the sins of the villagers.

Hanyuu is invisible for the majority of the series to the majority of the characters. She is a sort of guardian angel to Rika Furude, her descendant whom she has followed since birth. In fact, Rika is the first person who is able to see her even though Hanyuu has been in Hinamizawa for centuries since her death. As such, Hanyuu regards Rika as her one and only friend despite the abuse she endures from Rika occasionally.

Hanyuu was once known as the demon god of Onigafuchi (Hinamizawa) under her true name, Hainiryuun Ieasomuuru Jieda. She travelled with her clan to the Onigafuchi Swamp and tried to coexist with the human villagers there, but the Furude priest refused to cooperate. However, Riku Furude, the heir to the Furude shrine and inventor of the nickname "Hanyuu", fell in love with Hainiryuun and married her. They had a daughter named Ouka Furude, the first in a long lines of humans to carry demon blood. When the villagers of Onigafuchi became violent towards Hainiryuun's clan and could no longer tell who was a demon and who was not, they started to suspect and blame each other. Because of this, Hanyuu chose to become a sacrifice to atone for the villagers' sins. She asked Ouka to kill her in what became the first Watanagashi ceremony, and by doing so, she 'buried' the villager's sins along with her.

In Ayakashisenshi-hen, she is a fairy who helps Rika and her friend Satoko Hojo in their battle against Tokyo Magika and their Ritual Tool Devils. Hanyuu gave Rika a magical staff to prevent the magic-users of Tokyo Magika from stealing every last bit of magic from the Furude Shrine. It is also notable that she ends her sentences by saying her own name in addition to her usual "nano desu" phrases.

She is also one of the main protagonists of Yumeutsushi-hen, alongside a younger version of Rika.

Quiet, timid, cute, girly, and polite, Hanyuu is a sweet and innocent girl, despite her tendency to refer to herself with the pronoun "boku", which is generally reserved for boys. She is easily intimidated or frightened, and will whimper "Au au, auauau..." when upset or excited. When angry however, her eyes turn red and her voice becomes stern and mature like that of a god.

Hanyuu is extremely loving and carries a lot of guilt for the suffering she has caused Rika's friends. In addition, she often feels helpless or despairing due to her inability to influence the world around her in her spiritual form. All she feels she can do is apologize for her uselessness in protecting the ones she loves, which led to her habit of following those who are about to fall into paranoia or die and repeatedly saying "Gomen nasai" (I'm sorry). She is the source of the footsteps, voice and sense of being watched that Rena Ryuuguu, Satoshi Hojo, and other characters under the influence of the Hinamizawa Syndrome notice throughout the series.

Hanyuu is also very pessimistic, often telling Rika not to get her hopes up about the newest world, as every time she does, she only ends up getting hurt and disappointed. Instead, she encourages Rika to wait patiently for a fortunate world to come. She hopes that by dispiriting Rika, she can prolong Rika's mental life-span. Despite Rika's desperate desire to escape her fate of being killed, Hanyuu seems content with repeating the worlds over and over, as long as she gets to stay by Rika's side; she is secretly happy that she gets to spend more time with Rika than anyone else. Hanyuu likes cream puffs and sweets, which she tastes through Rika, whom her senses are linked with. She also likes stalking her friends, occasionally causing their paranoia to grow stronger, and some of them outright mistake her for the vanished Satoshi, such as Keiichi Maebara in Tatarigoroshi-hen, and Shion Sonozaki in Meakashi-hen. She wants to join the club, and unbeknownst to the members, usually watches their club activities.

Hanyuu dislikes spicy food and alcohol, both of which Rika likes, and often uses to punish Hanyuu when she is being annoying. Contrary to the village's image of Oyashiro-sama, Hanyuu hates violence and suffering, and is devastated by the horrific acts that are committed in her name. Because of this, she expresses a strong dislike for Takano, who is only attracted to the legend of Oyashiro-sama due to its bloody history. When the topic of Oyashiro-sama arises, Hanyuu is especially irritated and discouraged when she hears her name used as a name of punishment and violence, declaring numerous times that she would never curse or punish anyone through torture nor "demoning away" (however, Rika does note that Hanyuu loves to stay in the Saiguden, which is full of torture tools, because according to Hanyuu it makes her feel "at home"). In scenes where Takano enters the Saiguden and revels in the violent history of Onigafuchi Swamp in front of the statue of Oyashiro-sama, Hanyuu becomes very upset and repeatedly stomps on the floor in agitation. Since anyone at LV3 or higher of the Hinamizawa Syndrome can sense Hanyū's presence, Jirou Tomitake (LV3) and Shion (LV4) were able to hear "a child jumping up and down on the ground" in Minagoroshi-hen, Watanagashi-hen and Meakashi-hen. The jumping noises were Hanyū stomping the floor and exclaiming, "Stop it, stop it! I would never do such a thing, I never asked anyone to torture people!"

Hanyuu's first form appears to be a floating, translucent young girl with purple hair, violet eyes, and a pair of black or dark purple horns on her head (the left one is chipped slightly). When angry or channeling her god powers, her eyes turn a glowing red. In this spirit form, she wears an outfit reminiscent of one worn by a Shinto shrine maiden, with red hakama (long, split trousers), a white haori (kimono jacket), and a pair of long, pink furisode-like sleeves.

The second form that Hanyuu takes is her visible form, which is physically identical to her ethereal form except that she can no longer float and she is solid rather than transparent. Here, on her school days, she wears a school outfit with a red plaid skirt, a short sleeved white blouse, a blue vest with a blue bow, white socks and brown shoes. During her free days, she wears a pink jumper similar to Rika's dress, differing in that the jumper has pockets, its straps are thicker and have buttons, and has no ribbon. In this form, her horns remain intact.

Hanyuu expresses a dislike for her horns in one of the TIPS, acknowledging them as ugly. In the sound novels, people are aware of her horns, and Maebara Keiichi asks her about them, thinking they are toys. Once Keiichi sees that Hanyuu is sensitive about her horns, he apologizes, and the club members tease Keiichi by saying he has "a horn between his legs" and reassuring Hanyuu that there's nothing wrong with her. Miyo Takano, however, upon seeing them refers to Hanyū as a monster, which only further ignited Hanyuu's hatred for Takano. Even though Hanyuu possessed this hatred for Takano, she sacrificed her life to save Takano's in Miotsukushi-hen.

During an early episode of the Higurashi no Naku Koro ni Kai anime, Hanyuu appears in a thin-strapped pale pink sun dress. There are bows on tow of the straps and on the front of the dress, and the bottom is tinged with lace. She is only seen once in this outfit.

Hanyuu is a god, specifically a manifestation of what the villagers refer to as "Oyashiro-sama." As a god, she possesses several super-natural powers. The most heavily featured among these is her ability to manipulate space-time to create alternate dimensions, parallel to the original Hinamizawa, but with reversed time lines. This is the power responsible for the eternally repeating June of Showa 58 (1983). Hanyū and Rika's existences are linked in every way—if one dies, so does the other. Every time Rika dies, Hanyū uses her ability to escape whatever world they are presently in before she dies as well. The two then arrive in an in-between dimension. There, Rika and Hanyuu watch as the tragic events following Rika's death unfold in whatever world they just left. Eventually, a new Hinamizawa will be born from Hanyū's power and join the others in the in-between dimension. Each world created is represented by a spinning fragment of light with various scenes playing out on its surfaces; these fragments are referred to as kakera (カケラ, fragment, shard). After a little time, Hanyuu and Rika will enter the new world and a new story, with a new chance to prevent Rika from dying. Only Hanyuu, Rika, and occasionally the other club members can ever remember the past worlds of the repetitions.

Hanyuu also has various other abilities, such as flying, intangibility, and telekinesis. She has also displayed a power to stop the flow of time momentarily to alter an event, and to see and act through the Hanyūs that have existed in the past worlds that she remembers, just as Rika can.

In the sound novel version of Matsuribayashi-hen, Hanyū is shown to be capable of manipulating people's minds in a chosen range of field. During the Club vs. Yamainu mountain fight when Hanyū took the radio intercom, many Yamainu soldiers suddenly started hearing gruesome sounds and/or seeing strange apparitions, such as "dense fog", "a river... my dead sister is on the other side of the river", "wild bears", "the sound of a human being crushed by a train", et cetera. This ability is not shown in the anime; only Keiichi's voice-acting of a tortured soldier was shown in the anime.

In Saikoroshi-hen, it is revealed that Hanyuu's powers actually are influenced by the prayers of others, just like any other deity; when Rika died in the car crash, her friends prayed that "Even if by sacrificing my own life, I wish she (Rika) would go back in time and make it so that the accident never happened", Hanyuu was able to find Rika in the other world. Also in that arc, when Hanyū placed a hand on Rika's forehead, Rika's lungs felt as if all the air was being squeezed out of her. In Higurashi Daybreak, one of Hanyū's strongest powers is Global Time Freeze, which freezes the entire field except for herself. This power is a reference to Dio Brando, a character from JoJo's Bizarre Adventure, whose strongest ability "The World" freezes time as well. Not only that, but Hanyuu also shouts "Muda muda muda muda!" just as Dio does as well (though, without the road roller).

The 2008 Higurashi film is based off Onikakushi-hen.

Hanyuu does not make an official appearance in the movie, but after Keiichi claws out his throat, the camera sets on the silhouette of Oyashiro-sama. The figure has horns sticking out of its head. 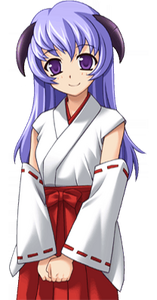 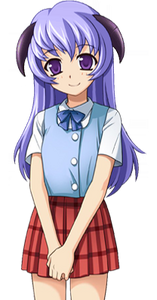 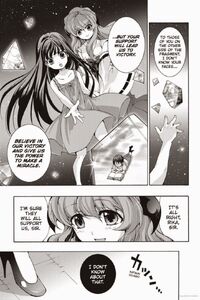 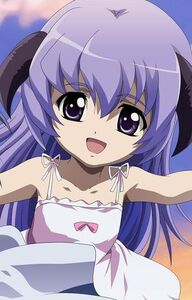 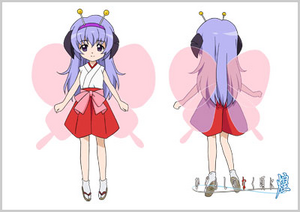