To achieve redemption for killing his brother, Genji (partially succeded)

Hanzo Shimada is one of the main protagonists in the video game Overwatch. He is a Japanese assassin and one of the two survivors of the Shimada clan, the other being his younger brother Genji, whom he thought he had killed in the past, something he is now attempting to redeem himself for. He is also the titular deuteragonist of the animated short "Dragons".

He is voiced by Paul Nakauchi.

Hanzo was born into the Shimada Empire three years before his brother Genji. As the eldest child, he would be the heir to the empire after his father. His family trained him in martial arts, archery, sword fighting, and the Dragonstrike, all of which he became extremely skilled at.

Though Hanzo took his position seriously, Genji did not. After their father died, and under instruction from the clan's elders, Hanzo's first action was to convince Genji to take more responsibility in the clan. Genji refused, and Hanzo was forced to kill him. Upon Genji's assumed death, Hanzo left the clan out of sorrow. The Shimada clan was later dismantled by Overwatch.

Hanzo wandered the world after leaving, though every year he would return to Hanamura to honor Genji. Many assassins were sent after him during this time.

In Dragons, Hanzo returned to Hanamura on the anniversary of his brother's "death," only to find what he believes to be an assassin stalking him. At first, he did not realize who it was, but after a long fight, the assassin revealed himself to be Genji. Genji forgave Hanzo for almost murdering him, and left him again after leaving him some words to ponder.

Hanzo constantly aims to prove himself, be it for responsibility or redemption. He heavily preoccupies a code of honor, yet displays arrogance at times. Despite their sibling rivalry, Hanzo really cares about Genji, as proven by the fact that he rejected his own clan when they forced him to kill his brother. Nonetheless, he sometimes misses his home and laments about what could've happened if he'd fulfilled his destiny as the master of the Shimada empire.

Although his regards to his family and duty have caused him a lot of trauma, Hanzo has his moments where he shows his own sense of humor. He likes to call out that his enemies fall like certain things, depending on the map where the match is held. For example, he states, "My enemies fall like...heh heh heh...destroyed pinatas!" while in Dorado. He enjoys a good bowl of ramen once in a while and, oddly enough, has an interest in riches, as conveyed by when he asks Junkrat about where he hides his treasure. 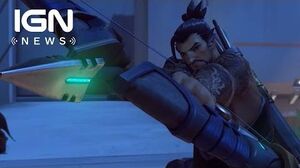 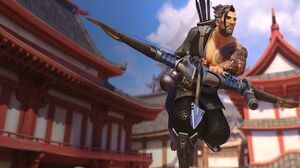 Retrieved from "https://hero.fandom.com/wiki/Hanzo_(Overwatch)?oldid=1924042"
Community content is available under CC-BY-SA unless otherwise noted.