Loyal Sidekick
Hanzo Hattori (Japanese: 服部 半蔵) is a character in the Samurai Warriors series. He is the Ninja of Tokugawa.

Hanzō is a persevering mystery, and he wants his master to rule. Since Ieyasu is on the side of Okehazama, his master wants to leave Yoshimoto and asks Hanzō to assassinate him before Nobunaga. By taking Naruto Castle and destroying other General Imagawa, Hanzō's efforts will lead to the independence of Ieyasu. After Shingen's parade in Mikatagahara stopped, Mitsuhide threatened the life of his master, and Hanzō was asked to safely guide Ieyasu through Iga. They escaped, but Hideyoshi ruled the land after the death of the revenge letterhead.

In order to express the correctness and suspicious support for Sanada, Ieyasu asked Hanzō to secretly infiltrate into Ueda Castle for information. He is discovered by the Sanada army, Hanzō will not be able to complete his mission and will have to fight his way out. Seeing that their hands were played, Ieyasu could not stop negotiations between Toyotomi and Sanada. Hanzō was forced to kill Hideyoshi in Osaka and did the work alone. When he reached the top, he was trapped between Yukimura and Hideyoshi. As Hideyoshi's death shortened the family, Hanzō continued to rule for his master.

When Shinobi takes over his mission in Ueda, he will steal the secret scroll between Toyotomi and Sanada before Yukimura blocks him. Their competitors were at a disadvantage, their plans were defeated and the attack was cancelled. Time has passed and Hideyoshi died of illness. His successor Hideyori and Yukimura continue to challenge Tokugawa's rule in the Ōsaka Castle. Hanzō infiltrated Sandamaru and rushed General Toyotomi to continue chasing Hideyori's head inside the castle. After killing Hideyori's doubles, Kunoichi and several other supporters of Toyotomi, he met Yukimura among the main guards.

Yukimura told him that Hideyori had committed suicide but he refused to let go of his arm. In order to end the "last warrior" of this era, Hanzō killed him in the battle. With his role in the turbulent times, Hanzō disappeared. 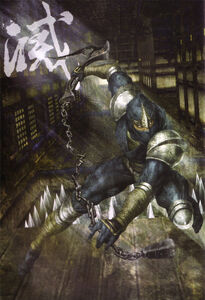 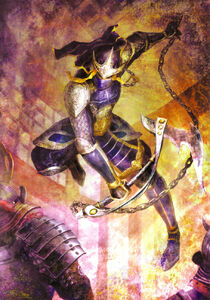 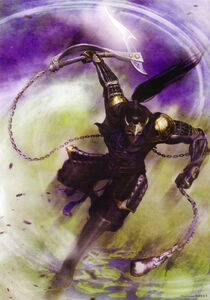 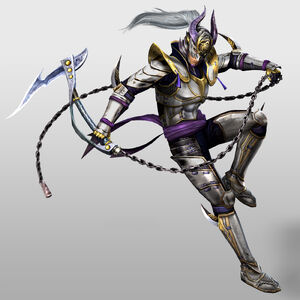 Hanzo in Samurai Warriors 4.
Add a photo to this gallery

Retrieved from "https://hero.fandom.com/wiki/Hanzo_Hattori_(Koei)?oldid=1930120"
Community content is available under CC-BY-SA unless otherwise noted.