Hanzo Hattori, also known as Hanzou, is one of the main protagonists in the World Heroes video game series.

Hanzo Hattori is a young head from Iga Ninja and is said to be the most powerful ninja family in Japan. Hanzo is very confident about his strength, but still hopes to make himself better every day and become "the strongest in history" to commemorate his position. He often practiced and frustrated his biggest competitor, Fuuma Kotaro.

Hanzo never refused to challenge and despised evil, so when Dr. Sugar Brown invited him to the World Hero Championship, he immediately accepted it. After Geegus was defeated, Hanzo left the game to travel around the world and further improve his skills. He wants to know what happened to all the powerful fighters he encountered during the game. On one of his journeys, Hanzo met a fighter Ryoko Izumo and invited her to participate in the new World Heroes tournament, she became obsessed with him (with the French sword Jeanne D'Arc). He defeated the sponsor Zeus and his followers Ryofu and Jack the Ripper, who again offended them.

Hanzo felt a disturbing air in the third tournament and joined again to defeat the returning Zeus and Neo-Dio. He still feels like that his training is not enough. 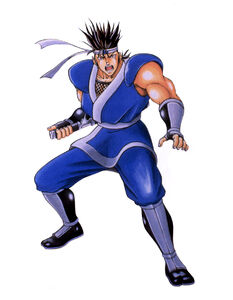 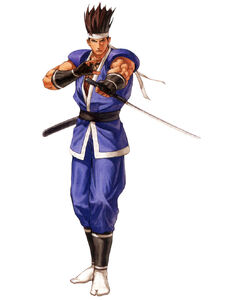 Hanzo Hattroi in NeoGeo Battle Coliseum.
Add a photo to this gallery

Retrieved from "https://hero.fandom.com/wiki/Hanzo_Hattori_(World_Heroes)?oldid=1858620"
Community content is available under CC-BY-SA unless otherwise noted.