Harold Joseph Hogan, also known as "Happy" Hogan is a recurring character in the Marvel Cinematic Universe, appearing as a supporting character in the Iron Man trilogy, the tritagonist of the Spider-Man trilogy and a minor character in Avengers: Endgame. Happy Hogan is Tony Stark's close friend and also his former bodyguard. Though not a skilled fighter, Happy has a kind soul, willing to do anything to aid or protect Tony or Peter Parker, even in life-threatening situations.

He is portrayed by Jon Favreau, who also directed Iron Man and Iron Man 2.

Harold Hogan was a professional boxer was nicknamed "Happy" because he rarely smiled, and after his boxing career, was employed by Tony Stark as his personal bodyguard. In Switzerland, Happy accompanied Tony Stark who was with his date, Maya Hansen. Happy attempted to keep Aldrich Killian away from Stark on the elevator, but failed. After accidentally causing one of Hansen's experiments to explode, they explained that it was an experiment, and he wished the two a happy new year.

Hogan accompanied Tony to Las Vegas for an award ceremony, but the two decided to not attend it, and gamble. Since Tony didn't go the ceremony, James Rhodes interrupted the two from gambling, and handed him the award. Afterward, Hogan drove Tony and reporter Christine Everhart, whom he had charmed, back to his mansion. The next morning, Happy followed Tony to the airport so that he could give a demonstration of the Jericho missile in Afghanistan. Eventually, Stark was captured by the Ten Rings, but escaped by creating a suit of armor with Ho Yinsen.

After Tony returned stateside, Hogan drove Pepper Potts to the airport to meet with Stark and drive back to Stark Industries. After stopping to get cheeseburgers at Tony's request, Hogan drove Stark and Potts to the company, and met with Obadiah Stane. Hogan was later present when Stark gave a press conference about his experience, and witness him announce that he would be shutting down weapons manufacturing of the company.

When Natalia Rushman appears at the Stark center, Happy boxes with her, however he loses. Later he helps he get to Hammer Industries to stop the Hammer Drones controlled by Vanko.

Happy started to be ridiculed for being Iron Man's bodyguard, and became very uncomfortable with his position until he was given the tile of Stark Industries' head of security. After Pepper met with Aldrich Killian and Eric Savin, Hogan became suspicious and started to investigate the two since he recognized Killian from the Bern 2000. During his investigation, he was confronted by Savin at the Chinese theatre, and was put in critical condition from Jack Taggert's explosion with extremis. While Happy recovered from his injuries, Tony continued his investigation and stopped Killian and A.I.M.

Happy assisted Tony in having Peter fly to Germany so he could assist Stark in fighting against Captain America and his team. After the travel in Germany, Hogan continued to be Stark Industries' head of security, but was also promoted to asset management to move Stark's technology from the Avengers tower. While transferring Tony's technology on the plane, he found the Vulture, who wanted revenge for Stark taking his job via Damage Control. The Vulture was stopped by Spider-Man, and Happy witnessed Peter reject Tony's offer of becoming an avenger.

Happy survived the snap along with Pepper and most of the Avengers, or was turned to dust by Thanos, who wanted to wipe out half of all life in the universe. Following the Battle of Earth, Happy attended Tony's funeral alongside Tony's family and friends after he defeated Thanos and his army. Afterward, Happy set with Tony's daughter, Morgan, and asked her if she was hungry. She replied that she wanted a cheeseburger, causing Happy to recall the time Tony asked him to get him one in 2009, and promised that he will get all the cheeseburgers she wanted. 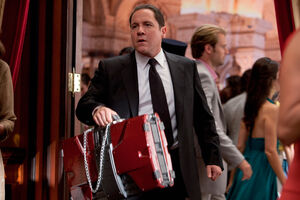 Happy with the Mark V briefcase.

Happy with Peter and Aunt May.