Robyn Hill's Happy Huntresses, better known as just the Happy Huntresses, are anti-heroes from the American animated webseries RWBY. They are a team of four Huntresses that use vigilantism and political influence to protect and provide for their hometown of Mantle.

The four members of the Happy Huntresses all graduated with top honors from Atlas Academy, all becoming licensed Huntresses. If they were a team before graduation is unknown. After graduating, they formed the Happy Huntresses to protect and provide for Mantle, albeit in their own ways using vigilantism, strongly opposing the government and military.

Robyn became a well-respected and liked member of society, often using her traits to seek vigilante justice for Mantle citizens, including stealing from the wealthy to give to the impoverished. Her popularity as a charismatic leader and advocate for justice led her to run for a seat in the Atlas council, publicly voicing her opposition to her opponent Jacques Schnee as well as General Ironwood, who, after the Fall of Beacon, tried to maintain order through use of an embargo.

After Robyn is informed of the truth, she temporarily sides with Ironwood to protect Mantle from a Grimm attack caused by Watts, and she, Qrow, and Clover go and apprehend Tyrain. However, after feeling betrayed by Team RWBY, Ironwood declares martial law. In the chaos, Robyn attacks Clover while Tyrain gets loose, and after a battle, Clover is killed with Qrow and Robyn framed for the crime. Both are arrested, and it is unknown when the Happy Huntresses will return. 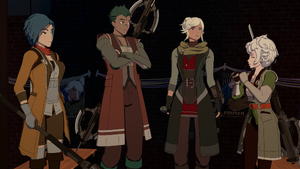 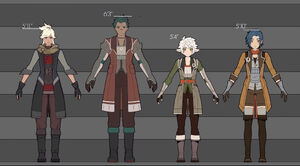