Lyla Michaels also known as Harbinger is a superheroine from the DC Comics Universe.

She was created by Marv Wolfman and George Pérez.

In Superman/Batman: Apocalypse, she was voiced by Rachel Quaintance.

In the Arrowverse, she is portrayed by Audrey Marie Anderson.

Lyla Michaels was from an unknown, but History of the DC Universe #2 implies that she is from Earth-One. As a child, she was found floating in the sea by the Monitor, who brought her to his satellite and raised her as his assistant. Lyla was raised by the Monitor, and studied the Multiverse alongside him, and became a historian.

Lyla was sent to summon heroes for the Monitor, who needed them top protect the cosmic turning forks as they were lost few remaining in the universe. Lyla transformed into Harbinger when entering the energy chamber in the heart of the satellite, and was sent across time through different universes to gather selected heroes. As a result of absorbing the energy from the satellite, Lyla was able to make multiple copies of herself, allowing her to collect the heroes quicker.

During her travel, a Shadow Demon possessed one of her copies, allowing the Anti-Monitor to manipulate and use the copy for his purposes. She was used to kill the Monitor, who intended for Harbinger to kill him so that he could activate the machines and shut Earth-One and Earth-Two universes. Also, Monitor sent the Earths into a Netherverse where everyone could be safe from the anti-matter wave, but the vibrations slowed between the two universes, and they started to merge with each other, which could lead to annihilation.

Lyla sent a group of heroes to Earths 4, S and X to protect its citizens from the ant-matter wave while she worked on bringing those universes into the Netherverse, and succeeded despite losing her powers to become Harbinger. She continued to assist the heroes, and became Harbinger again when resetting the universe following the battle at the Dawn of Time. She revealed that with resetting time, all of the surviving positive-matter universes merged into one universe with one history.

Harbinger aided the heroes in defeating the Anti-Monitor, and joined Lady Quark and Pariah in exploring the New-Earth reality. 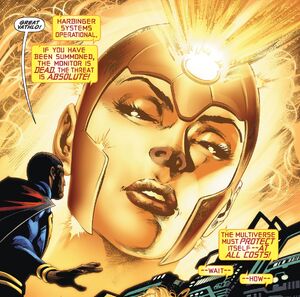 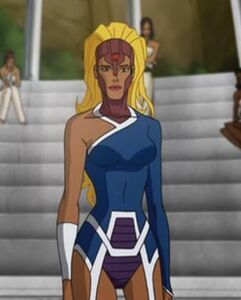 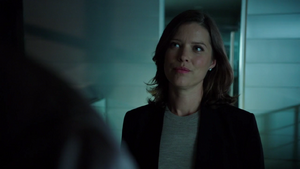 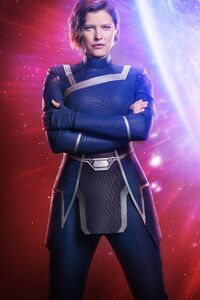 Lyla as Harbinger in Crisis on Infinite Earths. 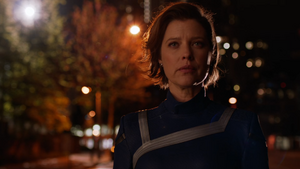 Retrieved from "https://hero.fandom.com/wiki/Harbinger?oldid=1806160"
Community content is available under CC-BY-SA unless otherwise noted.