NOTE: For the sake of this wiki, this page is mainly about Hardin's role during the War of Shadows, before the Darksphere corrupts him.

The Wolf of the Grasslands (japanese)

King of the Holy Kingdom of Archanea

Expertise with a lance

Help Marth to defeat the Dolhr Empire and Medeus (succeeded)

Be a good husband to Nyna (ultimately failed)

Hardin, also known as Coyote (草原の狼, The Wolf of the Grasslands) and later the Dark Emperor, is a major character in the Archanea Series of Fire Emblem. The younger Prince of Aurelis, Hardin became a devoted friend of Prince Marth during the War of Shadows. However, Hardin's personal problems after the war drew the attention of the Dark Pontefex, Gharnef. A disguised Gharnef offered the Darksphere to Hardin, which twisted him into a tyrant and destroyed his relationship with Marth. Hardin was a supporting protagonist and Marth's ally in Fire Emblem: Shadow Dragon and the Blade of Light and its remakes Book 1 of Fire Emblem: Mystery of the Emblem and Fire Emblem: Shadow Dragon. Hardin is also a major protagonist in the prequel BS Fire Emblem, and its remake, the New Archanea War Chronicles DLC of Fire Emblem: New Mystery of the Emblem. When uncorrupted, Hardin is voiced by Hori Hideyuki, who also voices Castor.

Prince Hardin is a slender middle aged man with short brown hair slicked backwards and a skinny mustache. He wears a white turban with a red jewel, as well as a matching white cape with a red clasp. Hardin also wears blue upper armor with purple pants (In Shadow Dragon and the Blade of Light) or green pants (In Mystery of the Emblem).

At heart, Hardin is an honorable and courageous man. A shrewd judge of character, Hardin quickly bonded with Prince Marth over their shared sense of justice. Hardin also values good teamwork in battle, and cares more about achieving the best possible outcome than personal glory in a fight, which is why he supported Marth's command of the Archanean League. Hardin also recognizes when his enemies demonstrate honor, as when he supported Princess Minerva in ousting Macedonian deserters, despite her country's occupation of Aurelis. Away from the battlefield, Hardin is a ruler dedicated to maintaining justice and peace. He is also a devoted lover who adores his wife Nyna.

However, to be a capable ruler and fighter, Hardin deeply suppresses more negative emotions. Despite recognizing Marth's capabilities as a leader, Hardin secretly resented that Nyna granted Marth the Fire Emblem, believing that he only received it because he is the descendant of the legendary Anri. Hardin and Nyna's marriage was purely political on Nyna's part, a fact Hardin was painfully aware of. That his passionate love was unrequited sent Hardin into an acute depression. It was this bottling of despair and jealously that fueled the Darksphere's corruption of Hardin.

At the dawn of the War of Shadows, the Dolhr Empire turned towards the conquest of Aurelis. As the younger brother of the country's ailing king, Hardin led the Aurelian defense, but despite his best efforts, Aurelis slowly lost its territory to Dolhr's ally, Macedon. Eventually, Hardin and the king abandoned their palace for the Northern Fortress; en route, Hardin freed enslaved citizens Wolf, Roshea, Vyland, and Sedgar. All four would become knights and assist Hardin in a guerrilla campaign against Macedon.

At some point in this campaign, Hardin encountered a group of deserting Macedonian soldiers who were pillaging Aurelian villages and using an abandoned fortress as a base of operations. While battling the band, he encountered Macedon's Princess Minerva. Careful to avoid exposing himself as a rebel army leader, and thus her enemy, Hardin suggested that they join forces to capture the fortress and defeat the deserters' leader Ruben. Upon successful completion of this mission, Hardin quickly departed, and it was only much later that Minerva learned of his true identity.

Later, Hardin learned of a plan by the leader of the Grustian Sable Knights, Camus, to bring the captive Princess Nyna of the Holy Kingdom of Archanea to Aurelius for her safety. This plan was in defiance of Dolhr's ruler, the tyrannical Emperor Medeus, and Hardin's squad arrived in time to help Camus' Knights fend off a Dolhr task force. In the end, Hardin's forces successfully escorted Nyna to safety, but Camus and his subordinates were captured and imprisoned for treason. While Hardin's forces continued to campaign against Macedon, while Nyna issued a call to arms for warriors to free the continent from Dohlr. This call would go unanswered for several months; in the meantime, Hardin quickly became infatuated with Nyna, though he suppressed his feelings for the sake of the rebellion.

Though the situation was grim, Hardin and his knights continued to fight against the Macedonian occupiers. Finally, Nyna received word that Prince Marth and the Altean army had received her call and reached the Aurelis. As Marth made his way to the Northern Fortress, Hardin's army marched to greet him. Instantly taking a liking to Marth for his valor, Hardin immediately granted Marth leadership of both armies, and together they successfully liberated Aurelis. Afterwords, Nyna formally added Archanea's army to their ranks, dubbed this united front the Archanean League, and granted Marth the Fire Emblem to symbolize him as the world's champion against Dolhr. As a high-ranking member of the league, Hardin assisted in Archanea and Altea's liberation. Near the end of the War of Shadows, Hardin assisted Marth in storming Dolhr, allowing Marth to confront and slay its ruler, the tyrannical Earth Dragon Medeus. Years after the war's conclusion, before Hardin's fall, Marth declared his contributions invaluable.

Following the War of Shadow's end, Hardin married Nyna and became the twenty-fourth King of Archanea. Under his guidance, the battered nation experienced a swift recovery, including a rebuilt army. Hardin's years of redevelopment  culminated in restyling the Holy Kingdom of Archanea into the Holy Empire of Archanea, with himself and Nyna as its first emperor and Empress. For a time, Hardin's rule promised an age of peace and prosperity for his country and the world.

Hardin's portrait in Fire Emblem: Shadow Dragon and the Blade of Light

Hardin's portrait in Fire Emblem: Mystery of the Emblem 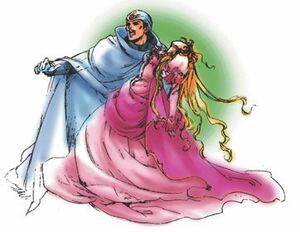 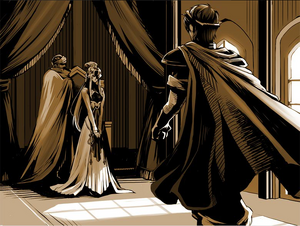 Hardin and Nyna meeting with Marth 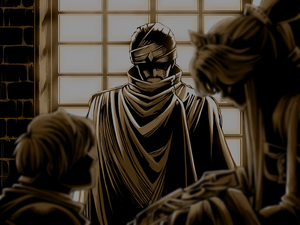 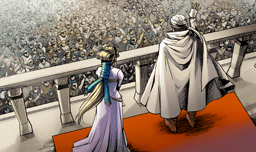 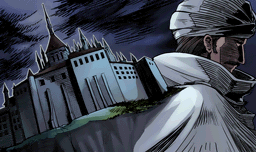 Hardin at the Archanean Palace 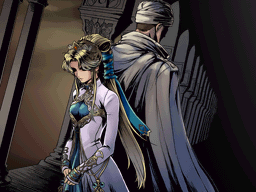 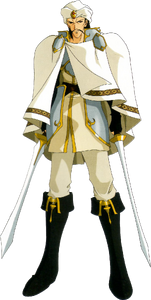 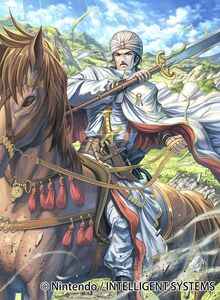 Artwork for a Fire Emblem 0 trading card of Hardin 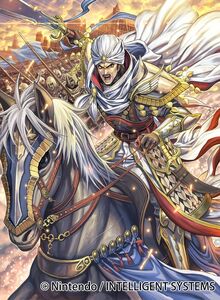 Retrieved from "https://hero.fandom.com/wiki/Hardin?oldid=2156542"
Community content is available under CC-BY-SA unless otherwise noted.