Being with Joker (formerly).

Commit crimes with the Joker (formerly).

Harleen Quinzel (also known as Harley Quinn) of the alternate universe is a twisted alternate version of the supervillainess Harley Quinn. She is a supporting anti-heroine of Injustice: Gods Among Us and Injustice 2, and the tritagonist of the Injustice film. She is a former villain who gave up being villain because she lost her Corrupting Influence.

She was voiced by actress Tara Strong, who also voiced the Arkhamverse version of the character. She also voices Timmy Turner from The Fairly Oddparents, Omi from Xiaolin Showdown and Xiaolin Chronicles, Rikku from Final Fantasy X and Final Fantasy X-2, Bubbles Utonium from The Powerpuff Girls, Batgirl in The New Batman Adventures, Raven from Teen Titans, Ben Tennyson from Ben 10, Unikitty in Unikitty!, and Twilight Sparkle from My Little Pony: Friendship is Magic.

Like the prime universe's Harley, she was a former psychiatrist-turned-criminally-insane-villainess who dated and aided the Joker. But after the Joker was killed by Superman after the Joker tricked him into killing Lois, which triggered a nuclear blast that destroyed Metropolis, and Superman formed the Regime, Batman seemingly reformed her. She was now a member of the Insurgency, who uses the Joker's old gang to cause chaos and disorder to help Batman in his fight against Superman and avenge Joker, Green Arrow, and many others who died by Superman's hand.

Five years after the destruction of Metropolis, Harley ran into the prime universe's Joker. At first, she didn't accept the fact that he was the Joker from another reality and thought he was an impostor. After they fought, she knew it was him and she temporarily aligned with him, though she still worked with Batman's Insurgency. But shortly after she failed to get Lex Luthor's armor for the Joker, he tried to kill her, but Lex Luthor saved her and told her that she outgrew him after she resisted the temptation to murder him.

After the fall of The Regime, at gunpoint, she escorted the Joker through a dimensional portal that led back to the prime universe and helped Batman and the transitional government restore Earth's governments.

Harley accompanies Batman to visit Superman in his prison. Afterwards, Batman explains that he is determined to fix the damage that Superman caused. Harley agrees to help him out. Later, in Green Arrow's "Quiver" Cave, Harley makes a phone call to wish her daughter, Lucy, a happy birthday. The conversation gets interrupted, however, when Amanda Waller and her squadron burst in to arrest her. Harley escapes on her motorcycle and makes a call to Batman, informing him of the situation. But again, the conversation is cut short when Harley's motorcycle is taken out by Deadshot. She later wakes up in the Pentagon where Waller welcomes her to the Suicide Squad. Harley states that Batman will come for her, but Waller doubts it, believing that she has covered her tracks well. Suddenly, Batman arrives, and Harley is surprised when he straight-up kills Waller and her second-in-command, Rick Flag.

Harley is given a job by Bruce Wayne, helping operate Brother Eye, a massive satellite monitoring system. Harley, Green Arrow, and Black Canary, with whom she appears to be very close, are assigned to run to Slaughter Swamp, where the society is producing Scarecrow's newest fear toxin. During this, Harley is given a direct cloud of the new formula, courtesy of Dr. Crane, and manages to stand up to a hallucinate variation of The Joker. Due to a misunderstanding, Harley ends up fighting Swamp-Thing and manages to convince him to help against the society. Upon learn the Society is in Gorrilla City, Harley and the others go of to stop them, and learn of Brainiac.

While trying to stop Brainiac, Batman assigns Catwoman, Cyborg, and Harley to reboot Brother Eye, so they can restore communications. However Harley is then hit by Poison Ivy's pheromones, forcing her to fight a hero of the player's choice. Afterwards she isn't seen for some time. After Wonder Woman defeats Cheetah, Supergirl is greeted by Harley and tries to stop Diana from killing Barbara, per Batman's orders. While Wonder Woman questions her, questioning the amount of blood on Harley's hands. The two fight briefly, ending with Harley being stabbed through the stomach. It is this act of violence that ultimately opens Kara's eyes to the horrors of Superman, Wonder Woman, Nightwing, Cyborg, and Black Adam.

After she defeats Wonder Woman, Supergirl rushes Harley off to a hospital. Harley is not seen after this, but it is revealed later on that she survived. 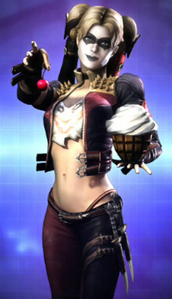 Harley Quinn in Injustice: Gods Among Us. 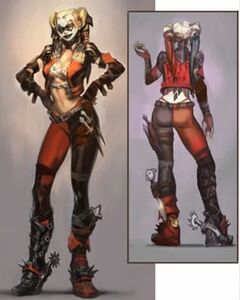 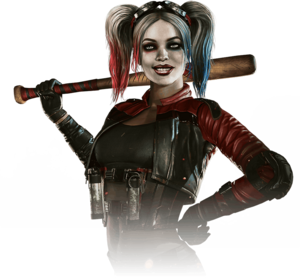 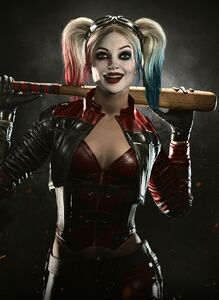 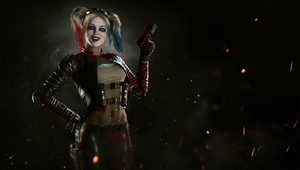 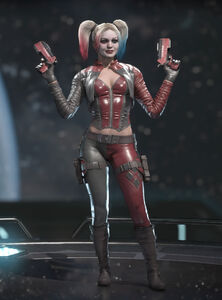 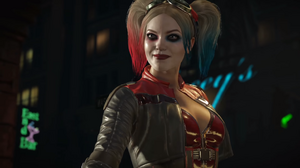 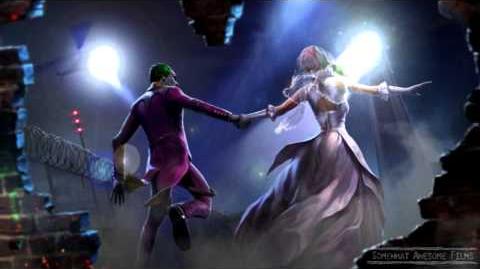 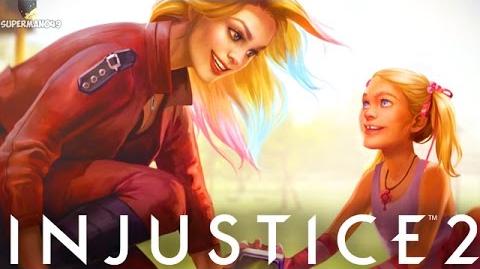