Dimwitted Parent
Harold is Billy's father and the wife of Gladys in the Cartoon Network animated series The Grim Adventures of Billy & Mandy.

Like his son, he is voiced by Richard Steven Horvitz.

Like Billy, Harold is very stupid and is prone to do stupid things. It seems he is an expert in dancing as in the episode Billy Idiot, he beat Mrs. Pollywinkle, who was Billy's dance teacher. He sees Billy as a genius due to the boy's "genius" when Billy was young and tries to get others to see this too, as seen in The Problem with Billy, much to Billy's irritation. Despite this, he still gets annoyed sometimes by Billy's antics. He is afraid of Santa Claus and his wife, Gladys, who is mentally unbalanced.

Harold is a voracious eater, and he is willing to eat anything. He once said that he was still so hungry after eating two breakfasts that he couldn't wait 'til lunch and so knowingly ate his wife's mucus covered pet rat live. He also ate his wife's goldfish but for the reason that only his wife heard and not Billy, Mandy, Grim or the audience. 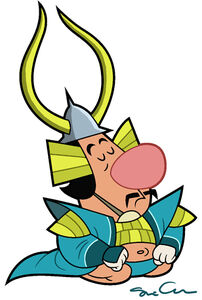