The Adventures of Captain Underpants

Likes to make comics with George Beard to make each other laugh, Loves to help George Beard make pranks in school

Harold Hutchins is one of the two deuteragonists (alongside George Beard) of the Captain Underpants franchise.

He is a 10 year old Caucasian blond with a T-Shirt and messy hair. He is best friends with George Beard, and he is a lot more smart and calm than George. He draws the comic books that he and George create. Bubblegum is his favorite food.

In the film, he is voiced by Thomas Middleditch. Also he voiced as Penn Zero from Penn Zero: Part Time Hero.

In the Netflix series, he is voiced by Jay Gragnagi.

Harold is the artist responsible for bringing Captain Underpants to the page.

His job is to illustrate the adventures that his best friend George does.

Harold Hutchins loves to pull pranks. Harold's other hobbies are skateboarding, watching TV and making comic books with George, which he draws the pictures for.

When his dad left the family when he was 6 years old, he became shy and insecure.

Harold is a blonde Caucasian kid with a large and fluffy hairstyle, a lime green and white striped T-shirt, golden colored shorts, & a pair of light blue rubber loafers, a blue button-up hawaiian shirt with a white floral print, a pair of lime green and blue shutter sunglasses.

He has black eyes just like most of the human characters. 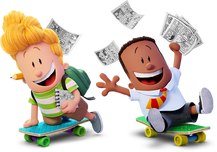