Mad Scientist (by herself after being rejected by the citizens of Crown Mesa, determinant)
Amazing (by Ivor)
Genius (determiantnly by Ivor or Jesse)

Member of the Old Builders

Trying to help others.

Do something to help people, to either help PAMA or shut it down in turn freeing her friends (succeeded).

Harper is a supporting protagonist in Minecraft: Story Mode. She first appears in Access Denied.

She is voiced by Yvette Nicole Brown.

Harper is one of the Old Builders. She, together with Hadrian, Mevia, and Otto, built the Portal Network and invented the Games. They used to have competitors travel from all over to play in The Games.

However, in time Hadrian and Mevia grew more power hungry and sadistic. They started to make people fight against each other, just for sport. Losers in the Games were forced to work in the mines, until they got another shot in the Games. Unknown to anyone, the Games was rigged, so nobody could win. Presumably for that reason, Harper left.

Harper than founded a new home in Crown Mesa. In, time she build a "thinking machine" named PAMA; created to make everything more efficent, to make monster to help with farming or maining. But one day PAMA went rouge and began to make everyone in Crown Mesa "useful. Harper tried to convince PAMA to stop, to no avail. Harper was forced into hiding and became so lonely that she built "friend machines".

Harper is intelligent, brave and resilient. She has a desire to help people, as shown when she created PAMA, a computer designed to maximize effeciency. However, PAMA soon turned against her and decided to put of all of the citizens of Crown Mesa under mind control by inserting Redstone Chips in their heads. Ever since, while hiding from PAMA and looking for a way to either help it or shut it down, Harper blamed herself for her friends getting chipped and for PAMA stripping the world bare of resources. She also grew lonely, to the point when she built humanoid figures inside her home that comfort her at the press of a button. Harper also got quite paranoid, as shown when first meeting Jesse and his/her friends. She thought they were up to something and was unfriendly towards them, until finding out that they weren't under PAMA's control. Even after that, when talking to Jesse and Ivor, she thought they came to Crown Mesa to steal her secrets. Also, if Jesse says that PAMA is crazy, Harper is hurt and denies it, trying to defend PAMA, implying that other people had considered her crazy in the past.

Despite that, Harper helped Jesse and Ivor escape PAMA (Lukas and Petra were already chipped) and showed them where PAMA's central core is, before getting chipped herself. After PAMA is shut down and everyone under it's control is freed, Harper is confronted by the people of Crown Mesa, who blame her for causing all the trouble by creating PAMA. Depending on the player's choices Jesse may or may not defend Harper, and she may, or may not be accepted back into the community. 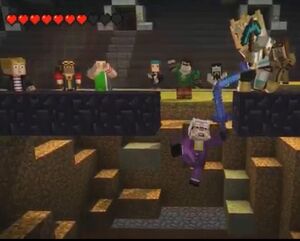 Harper watches with the others as Hadrian is eliminated by Jesse.
Add a photo to this gallery

Retrieved from "https://hero.fandom.com/wiki/Harper_(Minecraft:_Story_Mode)?oldid=1671854"
Community content is available under CC-BY-SA unless otherwise noted.