Heroes Wiki
Register
Don't have an account?
Sign In
Advertisement
in: Mature, Articles under construction, Male,
and 42 more

Saves the world from the evil threat (succeeded)

Harry Hart is one of the deuteragonist in the Kingsman film series.

He is portrayed by Colin Firth.

Harry and his unit were conducting a raid in the Middle East when their captive pulled a grenade. Harry's candidate for the position of Lancelot quickly jumped on the grenade, saving the unit at the cost of his life, but he still felt guilty for not properly searching the man. The other agent present was given the position with the man's death. He gave a bravery medal to the deceased agent's widow and his son, Gary "Eggsy" Unwin, telling them that if they ever need help, they should call the phone number on the back of the medal and deliver a coded message.

Seventeen years later, Eggsy called the number and used the code to get himself out of trouble after having been arrested for stealing a car and driving dangerously. Harry saw some Kingsman potential with the recent death of Lancelot, and they went to a bar where Eggsy had gotten in trouble with some of his stepfather's goons.

They tried to intimidate Harry into leaving, but instead he simply locked the front doors before starting a brawl that left all of the other men in the bar incapacitated. Finishing his drink, he apologized to Eggsy about it, saying that he had some pent up anger after the death of one of his associates, and was about to wipe his memory of the event when Eggsy said that he could keep a secret. Willing to test him, he placed a bug on his shoulder without him noticing before letting him leave.

True to his word, Eggsy didn't say anything when his stepfather was beating him to know who was in the bar with him, and before anything bad happened Harry intervened through the bug, asking for Eggsy to go to the Kingsman tailor shop to meet him there. Harry offers him a chance to become a Kingsman agent, taking him to the Kingsman Mansion for training and testing.

Meanwhile, Harry was also working on the case of Professor James Arnold, who had been kidnapped a short time ago and was the case on which the former agent Lancelot was working at the time of his death. However, Arnold was seen in public a few short days earlier. Finding Professor Arnold, he tried to interrogate him about his kidnapping, only for a chip in his head to explode, killing him and throwing Harry in a deep coma.

Upon his awakening, he took a fake identity to meet Valentine himself, posing as a billionaire. The two met over a McDonalds meal, discussing Valentine's views. However, Valentine suspected him to be a secret agent, and his drink had as a tracking device in it. Back in London, Harry takes Eggsy to the Kingsman tailor to have his suit measures taken, only to run into Valentine again, who was having a suit made for him as well. Still posing as a billionaire to him, he suggested he buy a top hat to go with the suit. The hat would have a listening device in it, allowing them to discover more about his plans.

Meanwhile, Eggsy was on his last Kingsman test: shooting his dog. He did not, which when he met Harry again made him very disappointed in him, revealing that the gun he was handed was filled with blanks. The two were not able to reconcile, as Harry had to leave to track down Valentine. Before leaving, he told Eggsy to stay and that they'd finish it when he'd return. Harry was being the father figure at this time. Following Valentine's trail to Kentucky, he assisted to a bigoted and hate-filled speech in a church. Not seeing Valentine anywhere, he was about to leave when Valentine activated his SIM cards making everyone, Harry included, go berserk and turning the church in a bloody battlefield. Harry personally killed several of the churchgoers and was the last man standing by the end. Remorseful over having killed so many people, he exited the church where he met Richmond Valentine face to face with Gazelle and two armed men.

Whilst at gun-point, Valentine joked about how their situation was similar to that of an old spy movie, before shooting Harry in the eye, where he was presumed dead. Unbeknownst to Valentine, Eggsy, Merlin, Arthur, or anyone else, the Statesman noticed the signal of Valentine's chips activating and sent Agent Tequila and Ginger Ale in a helicopter to investigate the situation. The two agents found Harry shortly after Valentine had left, and quickly applied alpha-gel to repair his damaged brain tissue, which saved his life. After investigating the church, Tequila and Ginger brought him with them back to the Statesman headquarters.

As a side effect from the bullet wound and the alpha-gel, Harry suffered from amnesia and believed himself to be a lepidopterist.

Harry remained in Statesman headquarters for a year, with the agency having no idea which organization he belonged to and how to restore his memories. When Eggsy and Merlin travelled to the Statesman headquarters after Kingsman was destroyed by the Golden Circle, they were shocked to discover that the former Galahad was still alive, and were devastated to learn that he did not recognise them. Merlin and Ginger attempted to help Harry regain his memories, but their attempt at doing so by filling his cell with water and nearly drowning him proved ineffective. It wasn't until Eggsy bought a terrier which resembled his dog Mr. Pickle, gave it to Harry and threatened to shoot it, made Harry memories come back to him. With that, Harry embraced Eggsy and reconnected with Merlin.

Harry was given all the essential Kingsman attire. His suit, watch, umbrella and modified glasses with a blacked out lense to accommodate Harry’s lost eye. Harry was once again the Kingsman agent Galahad. When a disgruntled American threatened Harry, he attempted to fight the group but was quickly overcome by their sheer strength and being unable to see them properly because he kept seeing butterflies. Saved by Whiskey, who defended Harry by beating the gang by himself and knocking them out, Merlin told him that although they had brought back his memories, his orientation would return in time and that his butterfly hallucinations would subside.

When Poppy announced that she has laced every drug in the world with a deadly virus that caused a blue rash and would lead to mania, paralysis and then death, Eggsy used the tracker he had placed in the girlfriend of the former Kingsman recruit Charlie Hesketh, lead them to a secret factory in Italy so they could acquire a sample of antidote to replicate and distribute worldwide to save lives. Harry went with Eggsy and Whiskey to Italy where Poppy's antidote supply for her drugs were located. Under the advice of Eggsy and Whiskey, Harry took over the control room once he knocked out a guard unconscious. Harry operated the sky lift to allow his fellow agents a chance to escape with the drug.

When the escape was thwarted by agents of The Golden Circle, Harry rendezvoused with Eggsy and Whiskey in a cabin. Harry became suspicious of Whiskey and believed he was working for both sides, a conclusion he came to when Whiskey destroyed the vial of antidote and shot the Statesman agent in the head. Harry quickly dealt with the Golden Circle agents using an explosive bottle of cologne. Eggsy became angry at Harry, believing he was still under the effects of his recent trauma and saved Whiskey with the Alpha-Gel. Eggsy scolds Harry and believed he made a mistake in bring him along, though covered up Whiskey's injury for him.

Discovering the location of Poppy’s hideout in Cambodia, Eggsy, Harry and Merlin flew there to steal the device that could help release the drones that dispensed the antidote. The three made their way through the jungle towards Poppy Land, but Eggsy inadvertently stepped on a land mine. Merlin froze the trigger for a split second allowing Eggsy and Harry to move away at the cost of Merlin's life. Harry, realising that this was the last time he would see his friend, thanked him for his service, and stated how it was an honour. Merlin sacrificed himself whilst taking the all the guards with him thus allowing Harry and Eggsy to move forward with the mission. Later, Eggsy and Harry stormed the base, killed off all the Golden Circle agents. Harry then ordered Eggsy to give chase to Charlie and force Poppy to give out the activation code. But Poppy quickly set her robotic dogs on Harry. Harry quickly subdued one of the mechanical beasts with the help of Elton John using bowling balls. Harry managed to subdue the other using the molten gold tattoo machine. After the fight, Eggsy and Harry entered the diner again to face Poppy. Harry quickly incapacitated Poppy whilst Eggsy injected her with a dose of heroin laced with her virus. Poppy then gave the activation code before quickly succumbing to the effects of the drug.

The two agents then prepared to release the drones with the antidote to the world but were stopped by Agent Whiskey, who tries to stop all drug users as recompense for the death of his wife and unborn son at the hands of two drugged individuals who tried to rob a convenience store. A grueling battle between them quickly ensued throughout the diner, ending with Harry and Eggsy pushing Whiskey into the meat grinder. They quickly entered the code and saved the lives of millions of people.

Harry and Eggsy were thanked by Statesman and both agents were offered the role of Whiskey which they both declined. Statesman head Champagne revealed they had acquired a distillery in Scotland and would help rebuild Kingsman effectively making them liquor sellers as well as tailors with the help of Statesman. Harry is then seen attending the wedding of Eggsy and Tilde, proud that his protégé had achieved so much. 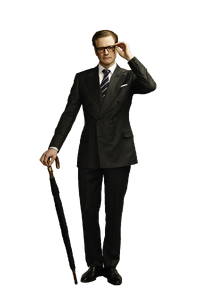