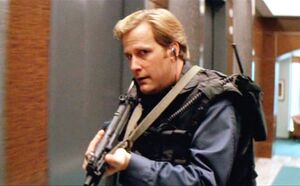 Harry Temple is a police officer, working for the Los Angeles Police Department. He is the partner of Jack Traven in the 1994 Speed, portrayed by Jeff Daniels.

Harry and Jack responded to reports of a bomb being detonated in a building's elevator shaft. On SWAT detail, he and Jack went to the top floor and headed into the shaft to look over the bomb on both the access hatch and emergency brakes. Harry realized the work was professional and so they decided to wait. Jack however decided to take the hostages out of the equation via construction crane on the roof. Aiding Jack, Harry lowered him down the elevator shaft while his partner placed the crane's hook onto the elevator. Harry pulled Jack up, however the bomber jumped the gun 3 minutes early, detonating the emergency brakes. With the crane keeping the elevator from falling, Harry and Jack, as well as other SWAT cops aided in the rescue of the passengers inside. With the last passenger out, both cops caught a breather before Jack realized the bomber was somewhere in the building.

Though Harry believed Jack to be incorrect, he did however consider the possibility and realized the bomber would have to be mobile. As a result, Harry believes he was in one of the elevators, only the civilian elevators were checked and cleared. Harry realized the building had freight elevators, which both cops checked and found the bomber inside a nearby elevator. Both slowly made their way onto the top, only for both to be shot at by the bomber. The bullet holes caused Harry to fall into the cabin and taken hostage by the bomber. Jack however was the last to enter, but now the bomber had Harry in his grasp and Jack holding him at gunpoint. As the bomber went to leave with Harry, Jack shot him in the leg, so the bomber would leave without his hostage, despite the displeasure of himself being shot. As the bomber left however, an explosion followed, causing Jack to go flying back into a door and Harry to remain where he was, applying pressure to his wound.

After this incident however, both cops are given accolades for their services and Harry is promoted to a desk job while his leg heals. Sometime after, Harry finds himself called by Jack, who tells him that the bomber from the incident prior was alive and had rigged a city bus with a bomb. Harry aids him however he can, telling him to look for any loose areas or wires, however Jack finds that the bomb is under the bus in front. Jack tells him however that one of the triggers on the bomb is a cheesy gold wrist watch, which Harry acknowledges as a "shitty timer" while not talking with Jack. Harry soon realizes that the one who is causing this, might in fact be or has been a cop at one point, so he orders his colleagues to look at cop files from the last 10 years. Harry begins to realize however that if he was indeed a cop, he might have been drawing disability, as he is missing a digit and though may not be LAPD, he was now living in Los Angeles.

Sometime later, as Jack arrived at the Los Angeles International Airport, Harry was on the line with Jack in order to aid him in possibly dismantling the bomb. Jack was under the bus and Harry told him to try to bypass one of the cables with a battery, however Jack told him attempting to bypass would cause it to detonate. Harry soon realized it was a collapsible circuit, however his colleagues found the name of the bomber: Howard Payne. Payne was a cop who worked for the bomb squad in Atlanta, but retired after a bomb left him with a missing digit. Realizing it was him, Harry told Jack the good news and told him they'd be going to go get him. As Jack was dealing with the bus, Harry and several other cops arrived at Payne's house, only to find it not only vacant, but also rigged with explosives. Harry however was caught and killed in the blast with his fellow cops.

Retrieved from "https://hero.fandom.com/wiki/Harry_Temple?oldid=1841975"
Community content is available under CC-BY-SA unless otherwise noted.