Haruna (Is This A Zombie?)

Stay with Ayumu until her powers come back.

King of the Night
Chris
Megalos

Haruna is the tritagonist of the light novel and anime series Is This A Zombie?. She is a Masou-Shoujo (Magical Garment Girl in the English dub) whose powers are accidentally absorbed by protagonist Ayumu Aikawa, who is ultimately forced to fight monsters called Megalos in her place until her powers return.

She is voiced by Iori Nomizu in the Japanese version of the anime and Jad Saxton in the English version, the former of whom also voices Yoshino.

She likes to call herself a 'genius' even though most of the things she does don't turn out right. She always treats Eucliwood Hellscythe as a little sister and is shown to be very childish and downright bratty at times (beating up Ayumu and getting upset over typical things).

Her head teacher Ariel has noted Haruna to be pretty self-centred; she often has trouble remembering people's names or important details of assignments, since she only remembers what she deems interesting and forgets everything else. Ayumu's name is an exception to this, showing that she cares about him. As a result of not being able to remember names, she has a tendency to give nicknames to most people; she calls Eucliwood 'Neckwaremancer', Seraphim 'Lady Leaf' and Maelstrom 'Yukinori'.

Haruna is shown frequently to have feelings for Ayumu as shown in episode 9 when Haruna beats up Ayumu for kissing Maelstrom (although by accident and Haruna's fault) and not her as well as for turning their date into a group activity. She also expressed concern for Ayumu in episode 11. When she arrives at Nagaleria's place, she sees her on top of him and runs back home, sobbing and believes that Ayumu's become a sexual predator.

Although Haruna's constant claims that she's a genius may be an exaggeration, they are not a complete boast as she has shown considerable knowledge about things such as Megalos, and Ariel has stated that she is a genius when it comes to magic. Ayumu has also acknowledged that she's 'a lot sharper than she looks'. 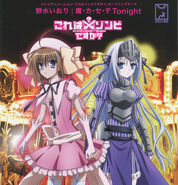