Haruna (榛名?), named after Mount Haruna, was a warship of the Imperial Japanese Navy during World War I and World War II. Designed by the British naval engineer George Thurston, she was the fourth and last battlecruiser of the Kongō class, amongst the most heavily armed ships in any navy when built. Laid down in 1912 at the Kawasaki Shipyards in Kobe, Haruna was formally commissioned in 1915 on the same day as her sister ship, Kirishima. Haruna patrolled off the Chinese coast during World War I. During gunnery drills in 1920, an explosion destroyed one of her guns, damaged the gun turret, and killed seven men. During her life, Haruna underwent two major reconstructions. Beginning in 1926, the Imperial Japanese Navy rebuilt her as a battleship, strengthening her armor and improving her speed and power capabilities. In 1933, her superstructure was completely rebuilt, her speed was increased, and she was equipped with launch catapults for floatplanes. Now fast enough to accompany Japan's growing carrier fleet, Haruna was reclassified as a fast battleship. During the Second Sino-Japanese War, Haruna transported Imperial Japanese Army troops to mainland China before being redeployed to the Third Battleship Division in 1941. On the eve of the Japanese attack on Pearl Harbor, she sailed as part of the Southern Force in preparation for the Battle of Singapore.

Haruna fought in almost every major naval action of the Pacific Theater during World War II. She covered landings of Japanese forces in Malaya (in present-day Malaysia) and the Dutch East Indies (now Indonesia) in 1942 before engaging American forces at the Battle of Midway and during the Guadalcanal Campaign. Throughout 1943, Haruna primarily remained at Truk Lagoon (Micronesia), Kure Naval Base (near Hiroshima), Sasebo Naval Base (near Nagasaki), and the Lingga Islands (in present-day Malaysia), and deployed on several occasions in response to American carrier airstrikes on Japanese island bases. Haruna participated in the Battle of the Philippine Sea and the Battle of Leyte Gulf in 1944, engaging American vessels in the latter. In 1945, Haruna was transferred to Kure Naval Base, where she was sunk by aircraft of Task Force 38 on 28 July 1945.

She is voiced by Nao Tōyama in the Japanese verison, and by Bryn Apprill in the English version.

All of the Kongou-class wear a modified miko uniform with differently colored skirts and thighhighs. They also wear the same signature winged hairband.

Haruna herself has long black hair (with an often ommited hairclip) and wears a red skirt.

After her second remodel was revealed, artists began to draw Haruna with underwear striped like her dazzle camoflage. Her canon underwear does actually feature vertical stripes.

She's a polite and humble girl. 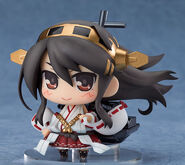 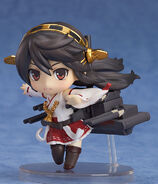 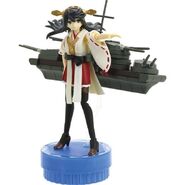 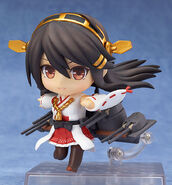 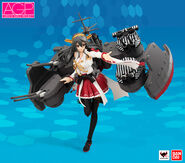 Add a photo to this gallery
Retrieved from "https://hero.fandom.com/wiki/Haruna_(Kantai_Collection)?oldid=2107181"
Community content is available under CC-BY-SA unless otherwise noted.