Harvey Dent is a character from the DC Animated Universe. He is revealed to have an advanced bipolar disorder, causing him to revert to a more aggressive personality called "Big Bad Harv". This was brought about by subverting his anger from a young age, causing it to fester until he couldn't control it any longer. When Dent sought psychiatric help, his files were pilfered and brought to mob boss Rupert Thorne. Thorne tried blackmailing Harvey, only to be physically threatened by Big Bad Harv. In the ensuing chaos, a chemical explosion damaged half of Harvey's face, causing his aggressive side to take over permanently much to the horror of Batman. He would often kidnap Robin

Harvey was also revealed to have a fiancée known as Grace. He briefly tried reconnecting with her after becoming Two-Face, but it was fated to end in tears. 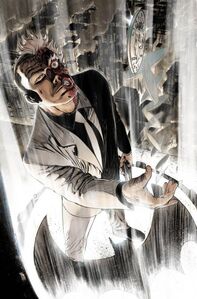