Hasuta is a male Hasturan (alien from Hastur) who was the space elementary school classmate of Nyaruko and Kūko. He is the son of the owner of CCE (parody of Sony Computer Entertainment), a famous video game company in space. He was first sent to get intel of earth's entertainment from Yoriko, but he failed and decided to stay on earth, and was later hired as an agent of the Space Defence Agency and colleague to Nyaruko and Kūko. He has feelings for Mahiro and enrolls in Mahiro's school under the name Hasuta Yasaka. He possesses the power of air, fights by creating strong wind, vacuum blades, or forming nearby vacuum areas around enemies. He is known to be stronger than both Nyaruko and Kūko, since he is the one who always stopped their fights during space elementary school. Despite his alien nature, the character also appears to be obedient and shy, making him the only humanoid alien in Mahiro's house who so far hasn't been attacked by Mahiro's fork.

He was voiced by Rie Kugimiya and Tomokazu Seki.

Pajama
Add a photo to this gallery

Pajama with cat ears and tails

Hastur as Bridget from Guilty Gear 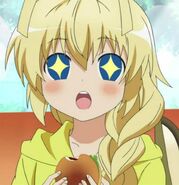 Add a photo to this gallery
Retrieved from "https://hero.fandom.com/wiki/Hastur_(Hasuta)?oldid=2132601"
Community content is available under CC-BY-SA unless otherwise noted.