The Kid With the Hat
Hat Girl
Some Girl

Darling (by DJ Grooves)
Lass (by Conductor)
Kiddo (by The Snatcher)

A Hat in Time

Hat Kid is the protagonist of the platform video game, A Hat in Time. She is a human-like alien attempting to collect the scattered Time Pieces, the fuel for her spcaeship, so she can return home. Hat Kid is a short girl with light blue eyes and brown hair. She wears a purple and yellow hat, along with a purple coat, a yellow cape, beige pants and brown boots.

Even though her real name is unknown, as it's never mentioned in-game, and in the instruction manual, she is listed as "Me," due to it being written entirely in first person.

Her voicelines were voiced by Apphia Yu.

Hat Kid is shown to have a childlike and happy-go-lucky personality, almost always having a smile on her face and rarely showing any sort of negative emotion. She is shown to be able to act both childishly and maturely depending on whether the situation calls for it, seems to not enjoy fighting or singing, and tries to make friends with everyone she meets.

While Hat Kid's move pool is relatively small compared to other platforming games, it is a highly versatile one that allows her to chain together many moves and reach most areas with relative ease and style!

By pressing the jump button, Hat Kid will jump into the air. Pressing it again while airborne will perform a second jump. While this is a basic ability in most platformers, jumping and double jumping is the foundation to Hat Kid's impressive platforming skills.

By pressing the dive button, Hat Kid will dive in the direction she's facing. This briefly increases her speed and can be performed both on the ground and in the air. While diving, Hat Kid can change her direction very slowly. Dives can be canceled simply by jumping, which reverts her back to her walking speed.

Diving in the air will briefly slow Hat Kid's vertical speed and lunge her in the direction she faces, giving her more movement horizontally. Jumping to cancel a midair dive also briefly slows her vertical speed. This allows the player to control Hat Kid in the air on a wider horizontal plane and allows her to land more precisely on targets.

Additionally, if she dives on the ground, she will briefly slide forwards and remain on her belly until the player presses the jump button again. However, if the player presses jump just as Hat Kid hits the ground, she will immediately bounce back up and lunge forward into a front flip, increasing her speed further until she touches the ground. Doing this in rapid succession can outpace the Sprint Cap in speed.

By jumping towards a wall, Hat Kid will start to run up it, gaining some vertical distance. She can then jump off of it onto a platform or another wall, where she can gain some more height and jump again. If the walls are parallel, this can be repeated to gain as much height as possible. Hat Kid also can't run or jump off of the same wall twice in a row. She must jump off of another wall or touch the ground to jump off of that wall again.

If Hat Kid preforms a dive and hits a wall, she will bonk her head and fall to the ground. However, if the player has the "No Bonk" badge equipped or cancels the dive before hitting the wall, she will start a wall run instead.

Press the melee button to perform a melee attack. At the start of the game, Hat Kid will be unarmed, and hitting anything will cause her to hurt her hand and flinch in pain. This also does no damage, so don't go fighting anyone just yet! Fortunately, during the first act in Mafia Town, Hat Kid will acquire an umbrella that will be used as a weapon throughout the game. Hat Kid can string together a maximum of 3 swings with the umbrella at once, with a brief waiting period until she can swing again.

When airborne above enemies, a prompt will appear over their heads to let the player know that Hat Kid can preform a homing attack. This allows her to quickly launch herself at the enemy to deal damage and bounce off of them. This is useful for both combat and platforming sections.

In the game's story, Hat Kid is a young girl who is trying to return to her home world via a spaceship. Not much other information is given about her.

There was originally going to be an adult Hat Kid in the game's ending, but was scrapped along with the entire ending. 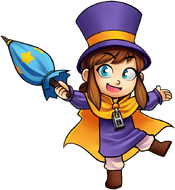 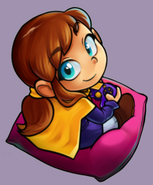 Add a photo to this gallery
Retrieved from "https://hero.fandom.com/wiki/Hat_Kid?oldid=1783969"
Community content is available under CC-BY-SA unless otherwise noted.