Heroes Wiki
Register
Don't have an account?
Sign In
Advertisement
in: One Piece Heroes, Male, Manga Heroes,
and 20 more

Hatchan, nicknamed "Hachi" (ハチ Hachi) is a major character of One Piece. By most characters, he is an octopus fishman, a former officer of the Arlong Pirates, and a member of the Sun Pirates before that.

After the rest of the Arlong Pirates were arrested, Hatchan was the sole escapee, and underwent many adventures which ended in him opening a floating takoyaki restaurant and meeting up again with the Straw Hat Pirates. Along with Keimi, he is one of the main supporting characters in both the Sabaody Archipelago and Fishman Island Arcs.

He is voiced by famous voice actor George Manley in English Version, and by Toshiyuki Morikawa in Japanese Version.

Hatchan, often called "Hachi", is an octopus Fish-man, former officer of the Arlong Pirates and a former member of the Sun Pirates. After the crew split up, he joined Arlong's crew and became the handler of the sea cow Momoo. When the Straw Hats came to take down Arlong, he was defeated by Zoro, and was imprisoned by the Marines. However, he managed to escape, and met the mermaid Camie after saving her from Sea Kings and Fish-man slavers. He opened up a seafood stand with her, fulfilling a childhood dream.

Later on, he crossed paths with the Straw Hats once again while they were heading for Fish-Man Island. He revealed that he felt bad about what had happened at Arlong Park, and decided to try and make it up to them and Nami by guiding them to the Sabaody Archipelago where they could have their ship coated for the underwater journey by Silvers Rayleigh, an old friend of his from before his pirate days. 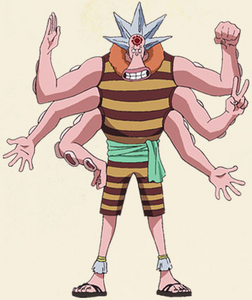