Hau is a character who is first introduced in Pokémon Sun & Moon. He is the grandson of the Island Kahuna for Melemele Island known as Hala. Hau serves as a rival as well as an ally to the player.

Hau is a boy with dark skin, dark green hair tied into a short ponytail with an orange band and gray eyes. He wears a black shirt, yellow board shorts with orange and white flowers on them and orange shoes. He carries an orange backpack with him.

Hau makes his debut in "No Stone Unturned!", where he is seen training with his Dartrix before the latter bound Ash, Pikachu and Rotom to a tree, thinking that they are enemies. However, Hau realized that Ash has battled Hala, his grandfather, in a grand trial. 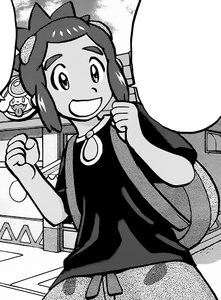 Hau in the manga 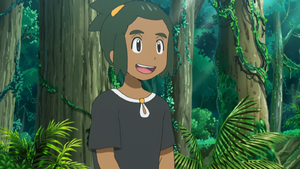 Hau in the anime