Hawkgirl (real name Shiera Sanders Hall) is a superheroine in the DC Comics universe and a member of the Justice League and the Justice Society. Her origins vary depending on the continuity, as she is reincarnated throughout the years, with her niece, Kendra Saunders, being the recent one. Shiera's soul would enter Kendra's body after the latter committed suicide, and still continue fighting evil threats.

One thing many of her incarnations share is their relationship to Hawkman (usually being partners, lovers, or spouses).

Centuries ago, Chay-Ara and her lover, Prince Khufu, were killed by Hath-Set with a knife forged from an alien metal called the Nth Metal. The properties of the metal and the strength of the duo's love created a bond between them, and this caused them to be reborn multiple times throughout the centuries.

In the 20th century, Chay-Ara was reborn as Shiera Sanders, and was kidnapped by Hath-Set (who was reincarnated as Dr. Anton Hastor). She was rescued by Khufu, who became reborn as Hawkman, and the two became partners and love-interests. After being granted a costume with a belt and nth metal, she became "Hawkgirl". In addition, the two also aged at a slow rate than normal humans due to exposure to unknown type of radiation in the 1940s.

In "Brightest Day", Shiera was one of a small group of people to be resurrected by the light of the White Lantern Power Battery. Shiera and Carter followed Hath-Set to Hawkworld, but Shiera is kidnapped by Set's minions. The Entity told Shiera to stop Hath-Set from killing Carter, because if he dies one more time, he will be resurrected. Shiera is attacked by Hath-Set's queen, who reveals that Shiera is her mother.

Hawkgirl is described as a very courageous warrior and is also known for her signature war cry. She can be very sassy and never hesitates to speak her mind. Despite her tough demeanor, there are moments where she does show a soft side.

Flight: Hawkgirl is capable of flight, provided by the wings made of Nth Metal.

Hand to Hand Combat: Hawkgirl is a trained combatant, being able to fight even without the use of weapons.

Armed Combatant: Hawkgirl mainly fight with the use of weapons other than her signature mace.

Genius Level Intellect: Due to her military/police training in various fields on her planet, she has a keen mind and is well-versed in tracking, military science, engineering, espionage, relaying information, and detective work that even impresses experts like Batman.

Reincarnation: Because she was killed by a special knife made of Nth Metal, Hawkgirl is destined to be endlessly reincarnated. Said ability can allow her to recall past memories and return to active duty as Hawkgirl.

Thanagarian Physiology - Along with her wings, another trait of her alien heritage is that Hawkgirl's physical attributes are more greater than that of a humans (ex. being able to carry several people while airborne and showing no signs of fatigue. 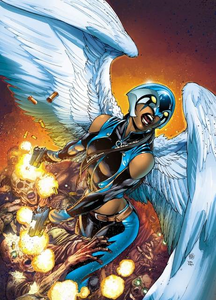 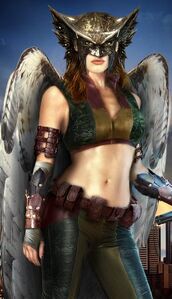 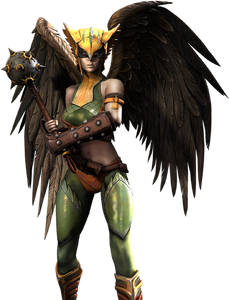 Hawkgirl in Injustice: Gods Among Us. 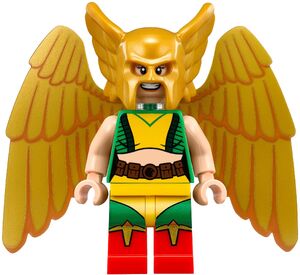