Saving the world from threats

Katar Hol (alias: Hawkman) is a superhero and a member of the Justice League. He is a Thanagarian and married to Hawkwoman.

Hawkman's most distinguishing features are the giant wings on his back and heavy armor. He wears a black cuirass with a hawk logo in the red circle in the middle. His belt, spaulders, greaves and gauntlets are golden. He dons a golden helmet with a beak-shaped front and outstanding wings on top.

His primary weapon is a large spiked mace, made of Nth Metal.

Fireworks - Hawkman arrived with the other Justice League member to help secure Blockbuster. He, Hawkwoman, Captain Atom, and Green Lantern (Hal Jordan) flew away with Blockbuster.

Revelations - Hawkman helped in fighting off Poison Ivy's mutated plants, where he destroyed it with his mace. He later arrived with the others to arrest the Injustice League.

Agendas - Hawkman attended the Justice League conference, discussing their expansion of the League.

Auld Acquaintance -  Hawkman unknowingly became a slave to The Light (due to the Starro-Tech), and had welcomed Vandal Savage with a silent kneel of obedience. He was ambushed by Superboy and Robin, the latter whom used a cure-tech on him.

Happy New Year - He appeared with the Justice League after the Gamma Squad rescued the hostages from the Kroloteans.

Alienated - As stated by Wonder Woman, Hawkman insisted on accompanying his wife: Hawkwoman to support her and so she wouldn't have to face the charges alone.

War - The Thanagarian silently watches from the crowd as Superman and Icon prove their innocence, becoming rather affronted when his wife was display as one of the six savage in the video.

Endgame - Hawkman observes as his wife and the others being found guilty, where he glanced at his wife being taken-away. Superboy, Miss Martian, and Adam Strange arrived into the courtroom, with new evidence. Hawkman watches as the Tribunal found out the truth behind those events, in which the charges against his wife and the others were dropped and were sent free. During their trip home, he and the others witnessed Vandal Savage's message about Earth being off-limits to alien invasion. Hawkman and the other returned home, only to find Mount Justice in ruins and was informed by Aqualad that the crisis has passed, but not without loss. 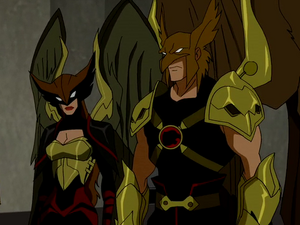 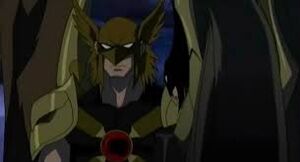 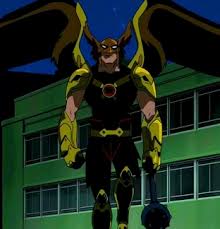 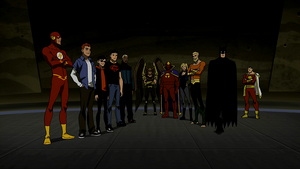 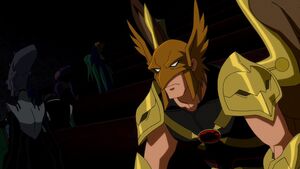 Retrieved from "https://hero.fandom.com/wiki/Hawkman_(Young_Justice)?oldid=1715881"
Community content is available under CC-BY-SA unless otherwise noted.