Hayley "Dreamsmasher" Smith-Fischer is the secondary tritagonist from the animated television series American Dad!. She is voiced by Rachael MacFarlane, the younger sister of one of the series co-creators, Seth MacFarlane, she also voiced Miss Tammy.

Hayley is the daughter of Stan and Francine Smith and the older sister of Steve Smith, but unlike her father dislikes and even frequently tries to undermine organized government, believing people like her father are part of a flawed and corrupt national power. Hayley rebels against both her parents but Stan in particular often acting out of spite towards conservatism just as often as she acts out of concern for those abused or ignored by "the system". Hayley has had intercourse with several characters on the show, including Stan's boss Avery Bullock but eventually settled down with her on-and-off boyfriend Jeff Fischer.

Hayley is an advocate of gay-rights, feminism, animal equality, environmental preservation, historical posterity, fighting world-hunger and care for the homeless. If Hayley's causes are undermined in anyway she will often make it her goal to remove or sabotage the offending party, be it callous local politicians, an unfair law or her own father. Stan and Hayley come to blows, not just due to Stan Smith's job at the CIA but also due to Stan's massive disappointment in how Hayley lives her life in general.

Hayley was originally set-up by Seth MacFarlane to be the liberal foil to the show's ultra-conservative Stan, but in time the series became less focused on partition politics, furthermore Stan slowly updated a variety of his old prejudices, such as homophobia, creating less and less conflict with Hayley. Though neither Stan or Hayley's political views were reformed the two still frequently snipe at each-other over minor policies one honors and the other opposes. Hayley is still a liberal sounding board for MacFarlane, but has long since been reformed to the series' quintessential rebel teenager more than junior Democrat.

Hayley was placed into a brainwashing program by Stan under the guise of a kindergarten program when she was young, though Stan would eventually deprogram her after an episode where he triggered her subconscious behavioral programming as a super-soldier Hayley still possesses the skills and mentality of her training. Hayley can handle highly trained CIA agents, cops, several alligators and attack creatures of unknown nature Stan keeps as attack dogs. Hayley's temper is feared by her parents and whenever she faces heart-wrenching drama like a break-up she often resorts to arson as an expression of her angst. Hayley is one of, if not the smartest member of her family and one of the only people that can match resident sociopath Roger in a battle of the wits. 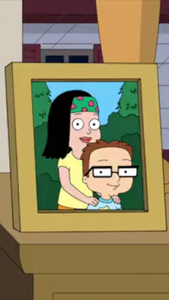 Retrieved from "https://hero.fandom.com/wiki/Hayley_Smith?oldid=1297588"
Community content is available under CC-BY-SA unless otherwise noted.