Chief Rabbit of the Watership Down warren

To get to Watership Down (succeeded)
To battle General Woundwort and the Efrafa rabbits.

Hazel is the central main character in Richard Adams's 1972 fantasy novel Watership Down along with it's 1978 film, it's 1999 to 2001 TV series and the BBC 2018 miniseries. He is the older brother of Fiver and a brave, tactful, clever and true buck, who acts as the leader of the Watership Down rabbits. He is voiced by the late John Hurt in the film (who also voiced Snitter in The Plague Dogs), Ian Shaw in the animated TV series and James McAvoy in the miniseries, who also played Charles Xavier in the X-Men series (which also starred Nicholas Hoult), Wesley Gibson in Wanted, Arthur Claus in Arthur Christmas, Gnomeo in Gnomeo & Juliet and adult Bill Denbrough in Stephen King's It.

Hazel grew up in the Sandleford Warren with his little brother Fiver. One day, Fiver has a vision and sees blood in the fields, that tells him that something dreadful will happen to the warren and to all that stay there. He and Fiver attempt to warn the Chief Rabbit of Sandleford, and Fiver tells him that they must leave the Warren. The Threarah rejects this idea, as it is close to mating season for the rabbits, and moving an entire warren would do more harm than good.

Having already considered the idea of leaving because of the way his fellow rabbits were being treated by the Sandleford Owsla, Hazel gathers as many rabbits as he can to join him and leave the Warren. The group taken consisted of Pipkin, Bigwig , Hawkbit, Dandelion, Blackberry, Silver, Acorn, Buckthorn and Speedwell. In the movie, a doe named Violet was added into the group, but was killed. They leave the warren that same night, but are attacked by the Owsla and Captain Holly. Holly tries to prevent Hazel from leaving, but Bigwig intervenes before Hazel is seriously injured. Holly, knowing he could not stand up to Bigwig and the group, retreats. Hazel leads the rabbits through a forest, narrowly escaping a lendri until they are stopped by the Enborne River. Fiver tells them that they must cross the river, but the other rabbits are wary. Bigwig spots a dog that is loose, and tells them that those who can swim must swim the river, much to Hazel's annoyance. However Blackberry comes up with the idea that they can use a piece of driftwood he found on the bank to carry the weaker rabbits across the water. His idea is a success, despite only Fiver and Blackberry truly understanding what happened.

On the other side of the stream, Hazel comes across a bean-field, where they take shelter and rest. However they are attacked by crows and are made to leave. Pressing on, the rabbits come across a road. Under Bigwig's instruction that it will do them no harm, they cross the road and travel on until they find a copse, and rest again. Speedwell, Acorn, and Hawkbit begin to question Hazel's authority due to the fact that it is not clear as to whether it is Hazel or Bigwig who is in charge.

As it begins to rain, a strange rabbit appears in the field. The rabbit introduces himself as Cowslip, and asks Hazel if he would like to join his warren, which is hidden nearby. Despite being uncertain of Cowslip's intentions, and ignoring Fiver's warnings, they follow Cowslip to his warren.

In Cowslip's Warren they meet Strawberry and his mate, Nildro-hain, whom they get to know very well. In the Great Burrow they listen to the poet Silverweed's poem. This poem frightens Fiver, and he dashes out of the warren in fear.

Hazel, being annoyed with Fiver's actions, takes Bigwig outside to look for him. Bigwig becomes angry at Fiver for putting their position in the warren in danger, and storms off back to the warren to make sure that none of the other rabbits will have anything to do with him again. However Bigwig gets caught in a Shining Wire. Fiver runs to the warren for help, and returns with the rest of the Sandleford rabbits. Blackberry comes up with a plan to free Bigwig. He instructs the rabbits to dig out the peg in the ground to loosen the wire around Bigwig's neck. After the rabbits free Bigwig, now realizing the truth of Fiver's words and Hazel's authority, leave the warren and continue their journey. Strawberry asks whether he can join them, because Nidro-hain died and he no longer wishes to be part of the horrors that plague Cowslip's Warren.

Upon reaching their destination, Hazel and the others begin to dig permanent holes. Hazel decides to copy the Great Burrow from Cowslip's warren, and under instruction from Strawberry, the rabbits manage to dig a large hollow chamber which they named the Honeycomb. During the night, they find Captain Holly and Bluebell at the foot of the down, badly injured and Holly moaning the Lapine word "Zorn". They learn from Holly that Fiver's vision was right, and that the Sandleford Warren was destroyed by man. Holly was determined to find and tell Bigwig that he was wrong, so he followed their tracks across many days. Only he, Bluebell and Pimpernel escaped, however following their tracks, they came across Cowslip's warren, and Pimpernel was killed by them.

One morning Silver and Bigwig come across an injured seagull named Kehaar. Hazel told his rabbits to help him and bring him food, as he could be useful to the warren and should not be left to die. Hazel has realized that the warren's only problem was a lack of does. He asks Kehaar to fly and search for other warrens where does may be taken from. The others praise this idea, thinking that Hazel must be as clever as El-ahrairah himself. Keehar later returns with news of another warren called Efrafa and the nearby Nuthanger Farm where there are some hutch rabbits. Hazel sends some of his rabbits, lead by Kehaar, to this new warren with a humble request for does. While the party is away, Hazel goes to Nuthanger Farm to try and free the hutch rabbits. They find four rabbits in the hutch, Clover, Boxwood, Haystack, and Laurel. Hazel and his group manage to free 3 of the hutch rabbits but are discovered by the Farmer as they led the rabbits out into the garden. Hazel is shot distracting the farmers attention away from Dandelion and one of the hutch rabbits. The others believed that Hazel was dead, until Fiver and Blackberry venture to the farm again, and bring him home. Hazel recovered from his wound, however, the bullet left him lame in his back leg.

The return of the expedition party brings bad news and no does. Against Holly's advice, Hazel leads another expedition party to Efrafa to take some does, despite having two does from the Farm, Hazel knew that they would need more to survive. Hazel instructs Bigwig to infiltrate Efrafa and get as many does out as he can, while he and the others wait near the river.Using the same trick as they did to cross the Enborne River, Hazel and his group escape with 10 does on a boat. On their way back to the down, they are found by Captain Campion, who relays their position back to Woundwort.

When Woundwort attacks the warren, Hazel sets out alone to try and solve the dispute by diplomatic reasoning, instead of brute force. However when Woundwort rejected his ideas, he returns to the Honeycomb to seal the runs behind him with the others. While listening to Fiver, who has become trapped in one of his visions, he comes up with an idea to finish Woundwort and his Owsla attackers for good. Taking Blackberry and Dandelion, he flees the warren and creates a relay from Nuthanger Farm to the Warren. At the farm, Hazel sets loose the farm dog, who chases Dandelion and Blackberry to warren. His lame leg began to ache from the long journey, and Hazel is caught by the farm cat. Before he can be killed, he is rescued by the farmer's daughter, Lucy, and nursed back to health before being driven up to the down in a Hrududu and set free.

After the defeat of Woundwort, he allowed some of his Owsla rabbits to stay in his warren. With help from the others, he set about deconstructing the ideas and ways of Woundwort and Efrafa, until it did not matter among the rabbits who came from where.

Eventually, a tired, old Hazel is visited by El-Ahrairah, who asks him to join his Owsla. After reassuring him that his rabbit offspring and companions will be safe, Hazel joins El-Ahrairah in death among the primroses.

Hazel appears in the television series as a main character, as Chief of Watership Down. He retains his personality from the book, and eventually learns to be a strong leader, earning the respect of his fellow rabbits and other creatures on the down. He is also proven to be arrogant when comparing his warren to other warrens, and also in Bobstones. He falls in love with Primrose, the series version of Hyzenthlay, and together they have 3 kits, Snowdrop, Mallow and Gilia. He is similar in appearance to his brother, Fiver, however Hazel is taller and has a slimmer build. His design does not change much in Season 3, however he has sharper lines and a more defined style.

Hazel appears in the 2018 miniseries. Unlike the book and film, Hazel falls in love with and becomes the mate of Clover instead of Hyzenthlay.

Also unlike the book, Hazel does not get saved from Tab the cat by Lucy and then released back into the wild. Instead that role is taken by Fiver. He also died off-screen instead of on when the Black Rabbit asked him to join her. 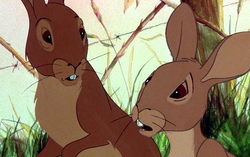 Hazel and Fiver in the film

Hazel and Bigwig in the film 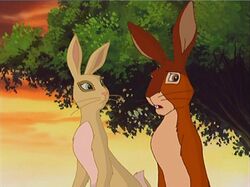 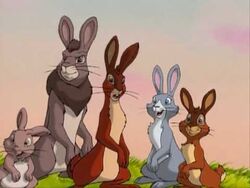 Hazel and Fiver
Add a photo to this gallery

Retrieved from "https://hero.fandom.com/wiki/Hazel?oldid=1733986"
Community content is available under CC-BY-SA unless otherwise noted.