To prevent Ragnarök
To learn magic
To prevent Fenris Wolf from being freed (in The Sword of Summer, succeeded)
To find Mjølnir (in The Hammer of Thor, succeeded)

Hearthstone also known as Hearth is a deaf elf living in Boston, a friend of Magnus Chase and will be one of the main characters in upcoming Norse mythology series Magnus Chase and the Gods of Asgard. He along with a dwarf named Blitzen posses as homeless people in order to watch over Magnus on the orders of a man named Mimir.

Hearth was born to Alderman and Greta in Alfheim, but was rejected by them for being deaf and mute. A year or so after his birth, Hearth's brother Andiron was born, who was favoured by their parents as he wasn't deaf.

However, one day when Hearth was eight and Andiron was seven, the two went to play near a well. Whilst Hearth was playing with some stones, Andiron was attacked and killed by a shapeshifter known as a brunnmigi. Due to being deaf, Hearth did not know what was happening until it was too late. He alerted Alderman to what had happened. Alderman killed the brunnmigi, but had Hearth skin it as punishment for not being able to save Andiron. The creature's pelt was placed in Hearth's room as a reminder for him to pay Andiron's blood dept, where he would have to cover the pelt with gold until not a single hair showed. To get gold, Hearth would do chores and rewards set up by his parents, where chores were granted a small amount of gold and rewards casted a large amount of gold. Alderman and Greta wished that Andiron survived and Hearth had died.

Sometime after this, Hearth ran away from home and pledged allegiance to the god Mimir, who gave him a choice; gain hearing and be accepted or learn magic, to which Hearth chose the latter. He alongside a dwarf named Blitzen (or Blitz for short) were assigned to protect a 14-year-old homeless demigod son of Frey named Magnus Chase. Due to being an elf, Hearth needed sunlight to survive whilst Blitz being a dwarf would become petrified if out in sunlight for too long. So whilst watching over Magnus, Hearth took the day shift whilst Blitz to the night shift.

The Sword of Summer

Two years later, Hearth is first mentioned in the book one winter in Boston by Blitz who tells Magnus (now 16) to go to him after seeing a middle aged man and blonde haired girl with flyers with Magnus face on them.

He then appears when he is seen standing next to a statue of Leif Erikson by Magnus, who is in his uncle Randolph's house and uses sign language to try and tell Magnus to leave the house. However it is too late as Randolph arrives and finds Magnus in his office.

Hearth and Blitz later come to Magnus's aid when he battles the fire giant Surt on Longfellow Bridge. After Magnus dies after defeating Surt, Hearth and Blitz search the Nine World and find him in Hotel Valhalla and explain to him that they were assigned by their boss (Mimir) to protect him after he became homeless.

Later in the book, Hearth goes with Magnus, Blitz and Samirah al-Abbas to Lyngvi to defeat Surt and prevent Fenris Wolf from escaping his binds. After preventing Ragnarök, Hearth goes to Asgard to learn more about magic. 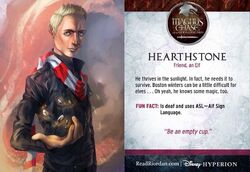 Retrieved from "https://hero.fandom.com/wiki/Hearthstone?oldid=1571748"
Community content is available under CC-BY-SA unless otherwise noted.