He is the first alien to be used and one of the most used throughout the series.

A magma-based humanoid lifeform with composed of bright lava body cover with red rocks. His feet are oval like designed with two toes. His eyes are connected to the flame on his head, and wears the Omnitrix symbol on his chest.

When under the effects of a cold virus, Heatblast's inner lava body and the flame on his head are turned blue.

Gwen as Heatblast has a more feminine appearance, her body is more leaner and chest was larger. Her face is longer and more curved, and has skinner forearms than Ben as Heatblast.

Ben 10,000 as Heatblast has a more muscular build and sported two miniature volcanoes on his shoulders.

As a toddler, Heatblast is much smaller and thinner body, and has a oversized head.

Heatblast looked mostly the same from original series, except the rocks on his body are more darker and the pattems are slighty alter leaving a fewer rocks covering his body. His are no longer connected to the flame of his head, and his Ultimatrix is recoloured green, making his appearance look more similar Alan Albright. In the Forge of Creation, 10 year old Heatblast's appearance looks the same, but the rocks on his body are recoloured brown to make him look more like he was in the original series.

Heatblast's appearance similar to his Ultimate Alien design, except his eyes are now connected to the flame on his head like in the original series. He is more taller and muscular, his face design is altered and his shoulder plates are slightly tilted up. His feet are also no longer has the slight oval-like design. 10/11 year old look the same from the original series, except the rocks on his body are darker and his face look the same as in Omniverse. 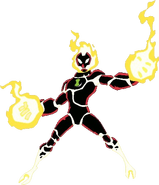 Heatblast in Race Against Time

Heatblast in Destroy All Aliens